I'll be frank. It may not have been a popular position, but I've always been a fan of Mitt Romney. He appears to be an honest guy, a good businessman and a turnaround specialist. But there's a lot of merit in Paul Ryan's assessment of the former Massachusetts governor's flagship program. 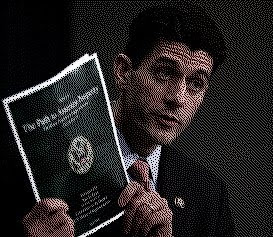 Asked about the Massachusetts health care plan signed into law by Mitt Romney, Ryan said, “It’s not that dissimilar to Obamacare, and you probably know I’m not a big fan of Obamacare. I just don’t think the mandates work … all the regulation they’ve put on it.”

Asked if he would rule out running for the presidency himself as emphatically as Chris Christie did by threatening to commit suicide, Ryan replied, with a laugh, "I guess I wouldn't talk in suicidal terms."

Ryan, Michele Bachmann and Allen West would all make eminently credible -- and electable -- candidates for office.

In fact, it would be quite the trick for the Democrats to try to paint Ryan as a dimwit, as they did with varying levels of success with Ford, Reagan, Bush 41 and number 43. That crap ain't gonna fly with the Wisconsin numbers whiz.

That's fine, leave him under there with Romneycare. Nationalized medicine is too much, and I would much more likely vote for someone that brings real promise of repealing Obamacare. Mitt needs to call it quits.