And a well-deserved metaphorical b****-slapping it was (brought to you courtesy of the DNC public relations arm known as Politiho).

Florida GOP Congressman Allen West this afternoon dispatched a scathing personal email to Democratic National Committee Chairwoman Debbie Wasserman Schultz, calling her "vile, unprofessional ,and despicable," "a coward," "characterless," and "not a Lady," and demanding that she "shut the heck up."

Wasserman Schultz, in whose neighboring South Florida district West lives, provoked his tirade with remarks after he left the House floor today, in which she responded -- without naming him -- to the Tea Party freshman's support for "Cut, Cap, and Balance" legislation to raise the debt ceiling. 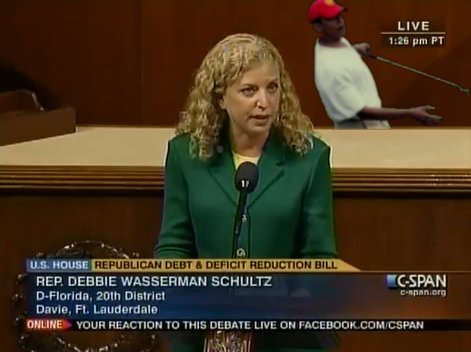 "The gentleman from Florida. who represents thousands of Medicare beneficiaries, as do I, is supportive of this plan that would increase costs for Medicare beneficiaries, unbelievable from a Member from South Florida," Wasserman Schultz said, saying the legislation "slashes Medicaid and critical investments essential to winning the future in favor of protecting tax breaks for Big Oil, millionaires, and companies who ship American jobs overseas."

Her criticism of the legislation -- more or less what most Democrats are saying today -- provoked a furious response. West copied members of House Republican and Democratic leadership on the email, as well as his chief-of-staff, Jonathan Blyth.

Look, Debbie, I understand that after I departed the House floor you directed your floor speech comments directly towards me. Let me make myself perfectly clear, you want a personal fight, I am happy to oblige. You are the most vile, unprofessional ,and despicable member of the US House of Representatives. If you have something to say to me, stop being a coward and say it to my face, otherwise, shut the heck up. Focus on your own congressional district!

I am bringing your actions today to our Majority Leader and Majority Whip and from this time forward, understand that I shall defend myself forthright against your heinous characterless behavior……which dates back to the disgusting protest you ordered at my campaign hqs, October 2010 in Deerfield Beach.

You have proven repeatedly that you are not a Lady, therefore, shall not be afforded due respect from me!

Wasserman-Schultz is -- provably -- a Marxist hack. She is unconcerned with her constituents and seniors in particular. According to its Chief Actuary, Medicare is set to collapse in just ten short years. Instead of working to save it, this ludicrous excuse for a politician instead demonizes Paul Ryan's courageous plan and the heroic Rep. Allen West.

Instead of working to save Medicare, she intones platitudes like "shared sacrifice", "winning the future" and "giving tax breaks to big oil and millionaires."

Hey, idiot: it's not "big oil and millionaires" that destroyed Medicare: it's you. You're an embarrassment, Debbie. And I can't wait until Allen West is House Speaker; I hope he puts your office in the basement with Melvin and his red stapler.

My God. I would trade a regiment of Jaime Herreras for one Allen West.

Big ones. Like you see getting carried on a freight train big. If only my district had someone like West...

This nation needs men like West in the Congress. Not spineless jelly fish like the GOP leadership who have adopted pre emptive surrender whenever and wherever possible.

Character, bravery, integrity characterize most of the servicemen I know. West does all of them honor. He'd make a great president.

Unlike certain gay male commentators, I do NOT fanatize of being angry in the bedroom with the female leadership of the Democratic Party.