Podhoretz blisters Obama: "Perhaps for the first time in American history, this president is [trying] to create a financial panic"

Writing at Commentary Magazine, John Podhoretz is shocked and appalled at the President's press conference this evening.

The President Is Actually Trying to Talk the Markets Into a Panic.

An enraged Barack Obama just took to the nation’s airwaves to announce his effort to strike a deal with Republican Speaker of the House John Boehner has fallen apart. Perhaps for the first time in American history, this president is literally using this press conference to create a financial panic over the weekend about the opening of the markets on Monday. He is warning of disaster on Monday. Clearly, he wants to use this as leverage to frighten the GOP into passing the plan proposed by Senate Minority Leader Mitch McConnell, which will push the debt ceiling problem into 2013, but it’s still an entirely new and astonishingly reckless gambit.

...He says Republicans said they would accept a dollar in higher taxes (or “revenue”) for every four dollars in cuts, which isn’t exactly saying “no’” to everything. For their part, Republicans in the House passed their cut, cap and balance bill on Wednesday, and it included an increase in the debt ceiling, so even by his own account his criticisms of the GOP are not accurate. 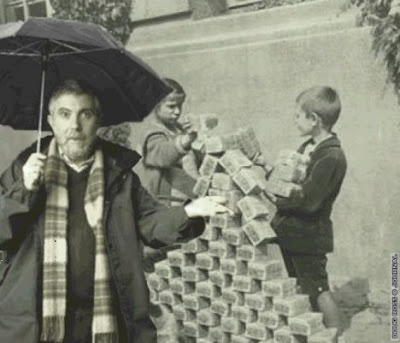 In other words, he lied. As usual.

• Bryan Preston live-blogs, "...he’s getting angrier and angrier. Are we about to see the President of the United States crack up before our eyes? All I can say is, thank goodness the markets are closed. This rant might rock them."

• Oh, and Preston adds this gem: "Funniest line of the presser: Obama said 'Sometimes if you wanna be a leader, you have to lead.' And then in typical Obama fashion, he walked out of the room... Some leader. We’re seeing what happens when someone with zero executive experience gets elected to the most difficult job in the world. Barack Obama is in over his head."

Who could have predicted such a thing?

As an aside, you can keep tabs on reactions to President Petulant's press conference at Memeorandum and TrendingRight.

Treasonous just took the lead over stupid, by a horse's head.

"The President Is Actually Trying to Talk the Markets Into a Panic."

Yup. It's all part of his plan.

Here's my message for the won.

Little baby Huey is getting all wee wee'd up.

What the matter you looser? You don't like the truth served cold?

You ain't seen nothing yet Pal. When 2012 rolls around, you are going to have lots to be wee wee'd about.