Why is President Obama backing the Mexican drug cartels? [Papa B]

That's not a joke. That's a serious question. Consider: 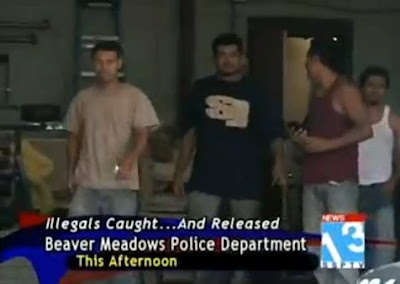 Exhibit A: The Obama-Holder Justice Department is suing Arizona for its enforcement of federal immigration law. Arizona's SB1070 is modeled directly after the immigration law passed by Congress and signed by President Roosevelt in 1940. In other words, Mr. Obama is siding with the Mexican government and its criminal elements against American citizens. Or, in the words of Professor Terry Lovell, "Mr. Obama is on the side of the Mexican drug cartels."

Exhibit B: The Justice Department's "Operation Fast and Furious" supplied more than 2,000 military-grade weapons -- many of them purchased with taxpayer dollars by government informants -- to the Mexican drug cartels. Among the weapons purchased for the cartels by the American people: Barrett .50-caliber sniper rifles, AK-47 assault rifles, and FN assault pistols. Put simply, Eric Holder was arming the Mexican drug cartels and lying to Congress about it.

Exhibit C: The Justice Department is also requiring Immigration and Customs Enforcement (ICE) to free illegal aliens even if they are caught committing serious crimes. Because a significant percentage of illegals caught committing crimes are members of Mexican drug cartels and other gangs, Mr. Obama is literally issuing "Get Out of Jail Free" cards to the most vicious criminals imaginable.

This is not a joke. This isn't funny.

President Obama is doing his level best to support the Mexican drug cartels. And, if that's "over-the-top", prove it. Can you show me one shred of evidence that Mr. Obama supports the American people over the drug cartels?

And one more question: are traditional Democrats so cynical that they can support these activities? I pray not.

The true outrage of this is that a large amount of illegal drugs are going to urban centers around the country to be distribute into the surrounding areas. Crack, weed, meth, these are still things that devastated the inner cities. Not enforcing immigration law(s), not building a secure border fence, not properly policing crimes committed by illegals, these things will keep the inner city areas blighted and dangerous.

I still don't understand why some people don't see this.

Can you think of a list of things Holder would attempt to use to explain the Justice Department's operation? That way, we'll be prepared.

By coincidence, I'm watching the ABC video of Jaycee Dugard's kidnapping story, and noticed that ABC had written a letter to Eric Holder, on Jude 30th, 2011, asking why the kidnapper/rapist's federal parole was cut short.

Holder hadn't responded since then.

Is there a link to the original article?

I hate to say it but I doubt the legacy Republicans will take any actions against those who have lied to the Congress; brojken our laws; or trampled the Constitution.

Treason will not be punished nor law breaking.

To quote the movie "The Man who killed Liberty Valence" its time for Western justice."

It isn't 2012 our politicians have to worry about. They should what happened to a government that ignored Americans in 1776.

All Americans should follow Jefferson's admonition about the care and feeding of the tree our liberty.

@TheBronze --- this is the original article. It was sent to me in the form of an email.