The Justice Department's "Operation Fast and Furious" supplied more than 2,000 military-grade weapons -- many of them purchased with taxpayer dollars by government informants -- to the Mexican drug cartels. Among the weapons purchased for the cartels by the American people: Barrett .50-caliber sniper rifles, AK-47 assault rifles, and FN assault pistols. Put simply, Eric Holder, probably under the direction of President Obama, was building a case for more gun control laws by shipping military-grade weapons to the cartels.

In sworn testimony, Attorney General Eric Holder denied knowledge of Gunrunner on May 3, 2011.

Asked in May when he learned of Operation “Fast and Furious” and “Project Gunrunner,” Holder claimed he ‘probably’ learned of it ‘over the last few weeks.’ In the testy exchange that followed, Issa pointed out that two Americans were killed by weapons associated with the botched operation, and that in the end, no major criminals were brought to justice. Issa also implies that the Department of Justice was deliberately slow-rolling the request for documentation about the program.

This was a flat-out lie.

He must have "forgotten" that on February 16, 2011, Senator Charles Grassley personally wrote to Holder to demand documents related to the operation. That was not a few weeks -- it was eleven or more.

I appreciate the staff briefing that Department of Justice (DOJ) and Bureau of Alcohol, Tobacco, Firearms, and Explosives (ATF) officials provided on February 10, 2011. However, the briefers focused on general issues related to challenges in successfully prosecuting gun trafficking cases. They refused to answer specific questions about the facts and circumstances that led me to request the briefing. 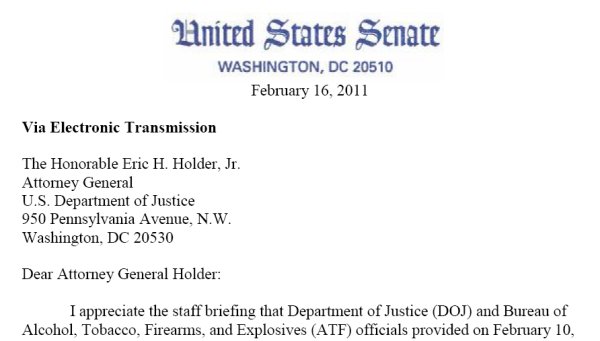 Specifically, they refused to say whether the approximately 103 weapons seized according to the Jaime Avila indictment were the only seizures related to the nearly 770 weapons mentioned in the indictment. They refused to say whether the third assault rifle purchased by Avila in January 2010—the one not found at the scene of CBP Agent Brian Terry’s shooting—has been recovered elsewhere. When asked whether ATF had encouraged any gun dealer to proceed with sales to known or suspected traffickers such as Avila, the briefers said only that they did not have any “personal knowledge” of that.

That's not all: on January 31, 2011, Holder was copied on a letter to Acting ATF Director Melson by Senator Grassley.

Again, three months or more prior to Holder's statement, he had been notified by a Senator that this operation was under investigation.

We need a special prosecutor. Now.


Update: Breaking story: Grassley & Issa catch Eric Holder with his cover-up underwear down around his ankles