Hanson: the Collapse of Our Failed Welfare State Will Purify Us 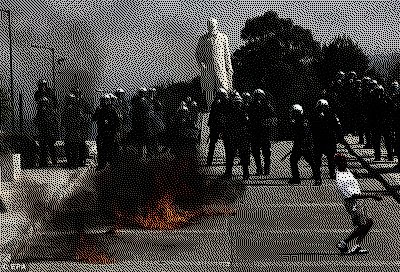 Historian Victor Davis Hanson is far more optimistic than I regarding the aftereffects of the impending debt implosion here in the U.S. We are approaching $15 trillion in national debt, which does not even take into account the $60+ trillion entitlement programs that will soon overtake our ability to pay. In that light, Hanson asks:

• "Should those on welfare who have more than three children still qualify for increased assistance for each additional offspring?"

• "Does the affluent class deserve mortgage-interest deductions on second and third homes?"

• "Should U.S. troops subsidize the defense of an allied and rich Germany or Japan 66 years after World War II?"

Hanson observes that the aberration of deficit spending will soon result in a return to rationality:

...the dogma that a teenager with dyslexia or a mature man with a bum knee will receive years of Social Security disability benefits will be assessed as an historical aberration of the last twenty years. A decision by an insurance company or government agency that a 62-year old must settle for arthroscopic surgery on a chronically torn meniscus rather than a complete knee replacement will not be interpreted as social cruelty.

Almost everything that can be said has been said about illegal immigration — and about the sustainability and morality of millions of Mexican and Latin American nationals crossing the U.S. border unlawfully and plugging into the American entitlement system. But an insolvent state like California, despite the liberal protestations, cannot continue to house 50,000 Mexican nationals in its penal system at a per capita cost of nearly $35,000 a year, or to extend free tuition in its broke university system to those without legal residence, or to provide social services to illegal aliens that may well cost the state nearly $10 billion a year. Even to suggest such limits was once considered illiberal. Now, not to state the obvious — that those without education, English, and legality have been expecting far more than what they could contribute in return — will be considered derelict.

Do the almost 50 million people now on "food stamps" all truly need them? Are they all starving to death? Is the program fraud-free and used only to buy bare necessities?

Is 99 weeks of unemployment (or more) reasonable?

Can someone who owns an iPhone, a big-screen television, a laptop computer, and a comfy leather couch really be called "poor"?

We can no longer afford the liberal philosophy of redistribution. Hanson concludes that there "...is a certain brutal honesty about this debt crisis. It is slowly beginning to force us to see the world in the tragic way it is, rather than in the therapeutic way we dream it must be."

But as Greece showed us -- and the public sector battle in Wisconsin hinted at -- civil unrest could be on the horizon rather than a becalmed expiation of liberals' sins.

Hope for the best. Prepare for the worst.

Collapse brings unexpected results. I doubt anyone could have predicted that the overthrow of the French monarchy would result in an emperor in less than 20 years, a far heavier system of taxation and repression.

The Democratic Senate has announced their intention to default rather than end Obama's blank check book.

Those who advocate moderation or compromise are ignorant of the nature of their opposition. They will brook no compromise. If they wish davault allow them to have it.

Better to confront the monter they have created rather than allow generations of the unborn to be burdened with billions they never acquised to, nor were consulted nor benefitted from.

Its time for a hard re set.

I hope you do a thorough examination of this Democrat position.