Damn the American economy: full speed ahead for the public sector unions!

John Hayward -- you may know him as "Doctor Zero" from Hot Air's Greenroom -- says that "the American presidency has come off the rails." 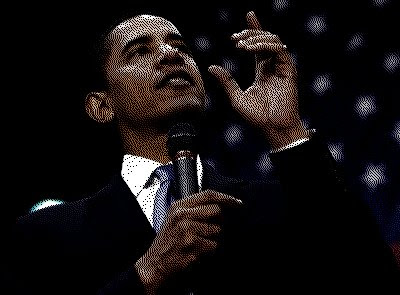 On Friday, right after his Democrat colleagues in the Senate used a procedural maneuver to kill the Cut, Cap and Balance Act without a real vote, President Obama held a town hall meeting at the University of Maryland before a carefully screened, very supportive audience. He said a few interesting things in this relaxed and comfortable environment.

Obama blamed divided government for the debt ceiling crisis. “I’m sympathetic to your view that this would be easier if I could do this entirely on my own,” he told a questioner who brought up the theory, fashionable in some liberal circles, that the 14th Amendment gives the President power to raise the debt ceiling unilaterally. The President went on to remark, with a chuckle, that this would give him more time to spend with his daughters.

In addition to recoiling in horror at the thought of America’s chief executive being arrogant enough to even speculate about the joys of dictatorship out loud, a thoughtful town hall attendee might ask why the Democrats didn’t balance the budget when they had total control of Washington from 2009 to 2010, and point out that they have controlled both houses of Congress since 2006. But you’re not supposed to ask questions like that.

Obama also told his audience that “it’s hard to keep up with all the different plans” for handling the debt crisis. No, it isn’t. There’s are only two real plans: the Cut, Cap, and Balance Act, which enjoys the support of a huge majority of Americans, or leaving the debt ceiling where it is. There are no other plans. There are only vague outlines… absolutely none of which have come from President Obama, who has made no concrete proposals at all.

Hayward has a memorable phrase that may truly become Obama's nom de guerre: "Architect of the new Depression":

[Obama says that] “we’ve made good choices so far.” (I am not making this up. He really said that.) He also declared, “The United States of America doesn’t run out without paying the tab. We pay our bills. We meet our obligations.”

Um… Mr. President? Running a huge deficit means, by definition, that you are not “paying your bills,” and you are the one who keeps threatening that your government will not “meet its obligations,” by shutting off Social Security checks, veterans benefits, and other essential services.

Hayward asserts that there's absolutely no reason to pay attention to Obama because he has yet to produce a plan. How can Republicans negotiate with... nothing? They can't.

And the word from Capitol Hill is not encouraging. Senate Majority Leader Harry Reid is reported to have put together a $2.5 trillion deficit reduction package -- over ten years -- that would lift the debt ceiling until 2013.

This is a joke and the Republicans should not play ball. That figure represents only 18 months of Democrat debt; those minuscule cuts would almost certainly result in a downgrade by Standard & Poor's. They've said as much.

Do you recall what George Bush’s final deficit was? It was loudly decried as a “record-breaking” figure in the mainstream press, and it was indeed far too high. The amount was about $458 billion. Barack Obama racks up that much debt in three months... The angry President who railed against oil companies and corporate jet owners one more time on Friday is a man lost in delusions the rest of us should refuse to entertain. He’s treating an existential fiscal crisis as a political opportunity to grab some more tax money, and goose his re-election numbers a bit.

That is what this fight is all about. Obama wants to continue borrowing trillions to keep the public sector unions fueled and ready; members' dues will then be laundered back into his 2012 campaign.

This power-mad man is dooming America's fiscal future in order to retain his white-knuckled grip on power.

You said it Doug:
"This power-mad man is dooming America's fiscal future in order to retain his white-knuckled grip on power."

Mad as a hatter.
A bonified psychopath.
Delusional.