Because it must be one or the other:

Harry Reid has decided to ratchet up the scare tactics a notch. We’ve already been told that if the debt ceiling isn’t raised and taxes increased, government checks might not go out, but now the schools will close: 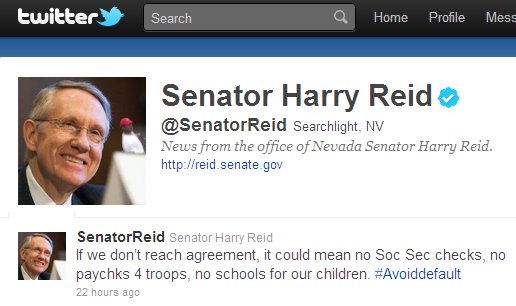 As August 2nd approaches, Democrats will be sweating like John Kerry during a luxury tax audit. Not because they fear default, but because they know a Y2K moment for the general population is approaching — that morning when everyone wakes up, looks around, realizes the world didn’t end and exclaims, “that’s what we were freaked out about?”

As others have confirmed, there's no chance that Grandma ain't gettin' her Social Security check. Because the only way that happens is if Barack Obama is more interested in funding ACORN and his other cadres of Leftist hacks. Let's see how that works for him politically.

Once again, courtesy of the Examiner’s Mark Tapscott, here are the hard numbers, in monthly amounts, for anyone foolish enough to buy into Democrat scare tactics:

All of that core spending adds up to $145 billion, which means that in the event of a debt limit, the government can pay it all and still have $55 billion a month left over.

Note also that this Tweet absolutely confirms Harry Reid is a liar, rather than simply an idiot, since he has previously insisted that Social Security “is in great shape for many decades… Today it is not a problem.”

So we could furlough:

Eric Holder? The National Labor Relations Board (NLRB), which is waging war on Boeing and other private sector companies? The EPA, which is trying to run an end-around on Congress with its own version of cap-and-trade? HHS, the blunt instrument of Obamacare? The Department of Education, also known as the stealth AFT and NEA funding agency? And HUD, progenitor of the Fannie Mae Housing Crisis?

Wow. Tough decision. Let me think for a minute...

Furlough 'em. Nuke 'em from orbit. It's the only way to be sure.

Ditto on the defunding of all the un-constitutional agencies, bureaucracies and propaganda arms of the U.S. government.

I vote for "nuke them all" because, like Nelson says, "Gotta nuke somethin'!"

I must steal it.

Jan 09, 2011 - Meet the Press - "One of the things that always troubles me is when we start talking about the debt, the first thing people do is run to Social Security," Reid said in an interview aired Sunday on NBC's "Meet the Press." "Social Security is a program that works. And it's going to be-- it's fully funded for the next forty years. Stop picking on Social Security."

In the words of Deion Sanders, "BOTH!"

wish we still had public hangings for public enemies like all these Democrat thieves and deceivers.

used to be, 150 years ago, we'd have a hanging every Sunday. then we stopped that, and all the bad people never went away, and never saw the rope, the criminals and liars and conmen and frauds multiplied and got more and more and more and more and then - they elected this Poisonous Sociopath Emperor Ba-Rack Hussein Obama to rule us.

he who chooses to take on Americans on our own turf loses.

and I love seeing all these Marxist freaks in panic and terror that they actually have Americans (finally) standing up to them.