The crucial debt ceiling story legacy media seems to have 'missed': U.S. could see downgrade in ratings even if ceiling lifted 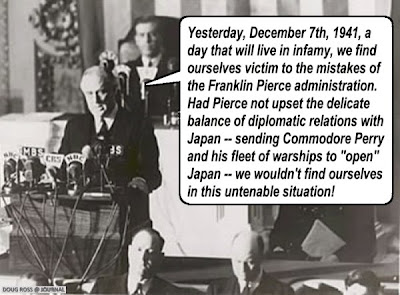 This is one of the most important messages for us to repeat until people get it.

That's not true... Our current debt-to-revenue ratio is, in economic terms, totally f***ed.

The President and his allies in the media wish to pretend these credit rating warnings are only about the risk of default due to a failure to raise the debt limit... They're not, as S&P makes clear:

A 50 percent likelihood that the U.S. will lose its top credit rating from Standard & Poor’s even if Congress reaches agreement on raising the debt ceiling left markets little changed.

...The U.S. will lose the AAA credit rating it has held since 1941 if New York-based S&P finds that a “credible solution” to the nation’s rising debt burden isn’t likely for the foreseeable future, the firm said yesterday. Borrowing will continue to rise unless a $4 trillion fiscal consolidation plan is agreed on, S&P said.

Let me propose the new narrative the GOP must press at every opportunity:

The President says he's trying to preserve our credit rating. He is not. Absent showing the markets some serious reforms that will put us on a sustainable path, our credit rating will be downgraded, not due to a debt-ceiling imposed default, but simply due to the fact we cannot pay the bills we are accumulating.

...We're the ones trying to save our credit rating, and that can only happen when Washington brings its spending priorities in line with what the public is actually willing to pay for government.

They're not willing to pay 25% of GDP for government. They have been willing, historically, to pay 18-21%. We must bring spending to that level.

Anytime we try to spend more than that, we always do simply by borrowing from our children. And we have now maxed out the possible debt we can lay on our children, and we have followed that up with going to 90% of the max of what our grandchildren can pay.

Let's liken the United States to the following household -- we'll call it the Obama family.

Now, in the real world, would any banker loan the Obamas money with a $60,000-a-year budget shortfall?

What would its FICO score (credit rating) be?

It's true: under Barack Obama, we're a subprime country. He and the Democrats built an unaffordable, failed "Stimulus" program into the baseline budget. And he is bankrupting the U.S., debt ceiling or no.