Can you guess what's different about Andrew Cuomo? [R.B.]

Andrew Cuomo took on the public employee unions -- and forced concessions from them -- in order to balance the New York State budget with spending cuts and without tax increases. Chris Christie (New Jersey), Scott Walker (Wisconsin), and John Kasich (Ohio) did pretty much the same thing in their states

But only Cuomo emerged from his battles with the unions lauded by media for his actions. Can you guess what made Cuomo different from the others? 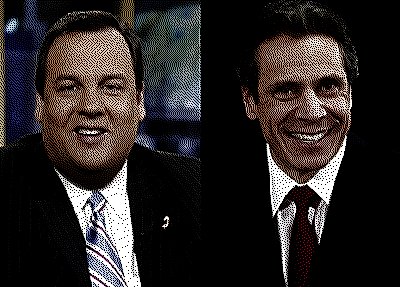 During the last several months, the governors of three states have gone toe-to-toe with powerful state unions in order to undo the harm done by their predecessors’ capitulations to state workers on wages and benefits. In Wisconsin and New Jersey, Republicans Scott Walker and Chris Christie were subjected to unprecedented abuse by the unions and their supporters. Yet in New York, Andrew Cuomo not only overcame union resistance, he managed to do so without much negative press, let alone the deluge of insults and demonization his colleagues suffered...

...Lacking the same political leverage their colleagues in Wisconsin and New Jersey possessed, the New York unions were forced to meekly bow to Cuomo’s dictates and accept drastic changes in compensation and benefits. Instead of being branded as a polarizing figure as was the case with Walker and Christie, Cuomo gets to play the state’s fiscal hero.

...as much as he deserves the praise for taking on a tough situation, the main lesson of this story is to show just how biased is the coverage of the not dissimilar confrontations elsewhere. As much as the collective bargaining issue helped generate sympathy for Wisconsin unions which refused to accept responsibility for the state’s parlous financial health, Walker’s goals were very similar to those of Cuomo. It should also be noted that like Cuomo, Christie didn’t touch the collective bargaining issue. Yet, he was branded a “Nazi” by rabble-rousing union thugs just like Walker, a slur never aimed once at the governor of New York.

The moral of the story is that unions and their cheering section in the liberal mainstream media can call a fiscally responsible Republican any name in the book and make it stick. But Democrats with the same intent get to play by different rules of engagement that can allow them to get tough with unions without being smeared...

This theme aligns perfectly with the spectacular new book Left Turn, which quantitatively measures the liberal lens through which Americans are forced to view events.

Doesn't this say something about the unions in NY too?

But I doubt any of the "cuts" are real. Just a Potemkin Village to show the rubes.

Cuomo was directly responsible for the housing debacle. I wouldn't trust him with a white hot stove.

But he is still being groomed for 2016, the media won't touch him.