Obama and Syria: 'Clueless' by design? [Dan from New York]

Wherein, leading foreign-policy analyst Max Boot echoes a number of points I made on Big Peace Monday about Obama’s mishandling of the Syrian uprising.

U.S. Sitting on Sidelines About Syria

That the administration can’t make up its mind about whether to push for Assad’s removal is beyond appalling. It’s puzzling. 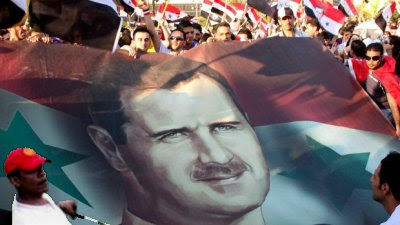 It appears I was premature last week in praising the administration for following Ambassador Robert Ford’s lead and finally turning decisively against the Bashar Assad regime in Syria. Now the Los Angeles Times reports the administration is backtracking. The newspaper notes Secretary of State Hillary Clinton “backed off on Saturday, saying the administration still hopes that Assad’s regime will stop the violence and work with protesters to carry out political reforms.” The article goes on to explain:

The change in tone reflects the continuing debate over whether Syria’s ruler is likely to survive the current turmoil, and how best to use the limited diplomatic tools available to pressure him.

For now, a State Department official said, it’s unclear whether the administration will ramp up the rhetoric and officially call for Assad’s departure.

“Whether we take it farther will depend on events on the ground,” said the official, who spoke on condition of anonymity because of diplomatic sensitivities. We need to think through carefully what we say.”

The headline might as well be “Administration is Clueless.”

Its confusion is especially bizarre given that in May, President Obama gave a speech on the Arab Spring in which he said: “There must be no doubt that the United States of America welcomes change that advances self-determination and opportunity.”

There might be circumstances where it would be appropriate to risk charges of hypocrisy so as not to undermine a valued ally such as Bahrain. But c’mon, guys, this is Syria we’re talking about–Iran’s ally, Hezbollah’s sponsor. That the administration can’t make up its mind about whether to push for Assad’s removal is beyond appalling. It’s puzzling. This is about as big an opportunity as we have faced in the region in decades–and the administration is sitting on the sidelines, mulling its options.

Or perhaps this represents tacit support for Syria, Hezbollah, and -- by extension -- Iran.

NEA is the most incompetent bureau at State. That says a great deal where cluelessness is a virtue, it really takes an amazing amount of stupidity to stand out among the people on the sixth and fifth floors at State.