As Mark Steyn describes it: "United States taxpayers were picking up the tab for Mexican drug lords’ weaponry in order that the ATF could identify high-up gun-traffickers. But, as it turns out, these high-up gun-traffickers were already known to other agencies — FBI, DEA, and other big-spending acronyms in the great fetid ooze of federal alphabet soup in which this republic is drowning. And, indeed, some of those high-ups are said to have been paid informants for those various federal agencies. So, in case you’re wondering why Obama’s second annual Recovery Summer is a wee bit sluggish at your end, relax: Stimulus dollars went to fund one federal agency to buy guns for the paid informants of another federal agency to funnel to foreign criminals in order that the first federal agency might identify the paid informants of the second federal agency." 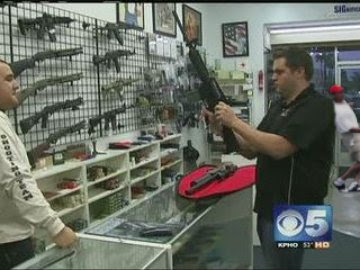 The investigators have asked the FBI and the Drug Enforcement Administration for details about the alleged informants, as well as why agents at the Bureau of Alcohol, Tobacco, Firearms and Explosives, which ran the Fast and Furious operation, were not told about them.

The development raises further doubts about the now-shuttered program, which was created in November 2009 in an effort to track guns across the border and unravel the cartels' gun smuggling networks. The gun tracing largely failed, however, and hundreds of weapons purchased in U.S. shops later were found at crime scenes in Mexico.

The scandal has angered Mexican officials and some members of Congress. Investigators say nearly 2,500 guns were allowed to flow illegally into Mexico under the ATF program, fueling the drug violence ravaging that country and leading to the shooting death of a U.S. border agent.

...The official said at least half a dozen cartel figures were being paid by one U.S. law enforcement agency while they were being targeted by another.

...two AK-47s purchased during the operation were found at the scene last December where U.S. Border Patrol Agent Brian A. Terry was shot to death near Tucson, allegedly by a Sinaloa cartel member.

A second U.S. immigration agent, Jaime Zapata, was slain in a cartel ambush in February in Mexico, and investigators now are trying to determine whether Fast and Furious weapons were used to kill him as well.

The sheer idiocy of this plan resembles the plot of a Three Stooges movie.

We need a special prosecutor.

When Hitlery first started yammering about guns to Mehico I thought, no way, NO WAY! Transactions in gun stores are too precise and every firearm is called in.... EVEN AT GUNSHOWS.
Now with the rest of the story it does indeed make sense. Barry and Eric may as well have pulled the triggers themselves. This was a huge breach, HUGE.
Unforgiveable, Actionable. Lets get these people thrown into prison, that's where you would be if you had done it.

There is no idiocy at all. Obama's plan is to show that guns are going to Mexico destined for drug lords purchased from border state gun dealers. Therefore requiring more restrictions on gun sales.

In order to accomplish this, the government of the United States had to facilitate the operation because it would not happen on it's own.