Consider this Exhibit 9,036 that union bosses are in it for themselves. 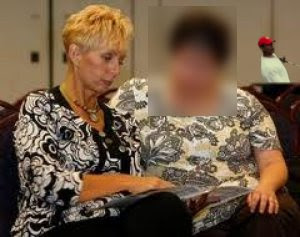 A federal indictment returned Wednesday alleges that the president of a Cincinnati employees union stole $757,009 since 2005.

Diana Frey, president of the Cincinnati Organized and Dedicated Employees union since its 2005 inception, is accused of directing CODE checks, ATM withdrawals, wire transfers and credit card purchase to various bank accounts... The 800-employee union alerted its 800 members to a pending investigation late yesterday in an announcement that revealed Frey “has not been available to the the members or to the board for some time.”

In a statement, Cincinnati City Manager Milton Dohoney said the situation is unfortunate and Frey is "in the process of formally severing her employment with the city." [Ed: Gee, you think it's time?]

Of course, like many union bosses, Frey's behavior seems oh so out of character:

This would not be Frey’s first brush with the law.

In 1983, Frey was convicted of theft by deception for stealing between $300 and $5,000, according to Cincinnati police and Hamilton County court records. In that case, she received a suspended one-year prison term, being sentenced instead to five years’ probation, a $500 fine and restitution. It was unclear Tuesday whether anyone at the city or union knew of the previous convictions - some under her maiden or previous married name - before she was elected union president in 2003.

When Frey, then administrative assistant to councilman Tom Luken, applied for another city job in May 1994, she checked “no” on her application in response to a question asking: “Have you ever been convicted of a local, state or federal offense?”

Now, if this alleged theft ticks off union members, I wonder what they'll do when they find out they're never going to receive the pensions they've been promised?

Since she is probably a wonderful, dues playing Democrat are there any bets that she'll be punished with 300 hours of community service and having to watch the entire "Friends" series?

Union official behaving like the greedy CEO that they rail aganist. Then they wonder why the public opinion of the labor movement is at an all time low in the USA.