"If social security payments are not made in August, it's because Barack Obama has directed Timothy Geithner not to pay them."

So says Mark Levin who links to a MarketWatch post detailing federal revenue and payments:

Despite all the rhetoric and posturing we see in the media and in Washington D.C., it is safe to say categorically that the U.S. Treasury will not default on its debt after August 2nd, even if the debt ceiling is not raised. Not only will the Treasury be able to pay interest on U.S. debt obligations, but there is money for other essential programs as well. However, there will be some serious cutting that has to happen because spending clearly exceeds revenues... 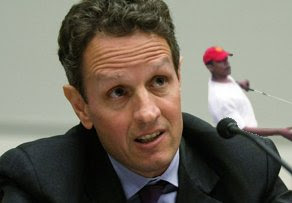 Q: How much revenue does the Treasury take in on average in a month?
A: Roughly about $200 billion.

Q: Why then do Treasury Secretary Geithner and others in government make such apocalyptic statement about the horrors of default?
A: I’m afraid Secretary Geithner and others in government are doing the moral equivalent of yelling “Fire!” in a crowded theater and they are doing so for political reasons rather than financial reasons. They simply do not want any interruptions in the bloated spending underway in Washington and they want to scare Americans into thinking the end of the world is nigh unless the gravy train keeps chugging along.

President Obama has not even proposed a budget. And there is more than enough money to pay not only debt service, but Social Security, Medicare, active duty military, etc..

What Obama, Geithner and their Wall Street buddies fear is an end to the gravy train for investment banks and public sector unions.

I know this is difficult for the likes of Mitch "Jello" McConnell and John "Weepy" Boehner, but: You. Must. Not. Yield.

Send a budget to the Senate that prioritizes spending for the revenues received. And then let the Democrats sort it out.