This kind of screw-up can only be chalked up to willful negligence or outright stupidity:

A measure to repeal a 2007 federal law that would push many traditional incandescent light bulbs off the market failed to win two-thirds support needed to pass in a House vote Tuesday.

A 233-193 majority of the House backed the measure proposed by Rep. Joe Barton (R. Texas), would have repealed a federal mandate that light bulbs meet certain efficiency standards by next year. But the bill was brought up under a procedure requiring that it receive two-thirds vote for passage. 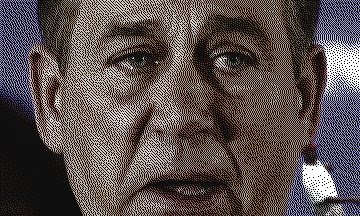 Because he bypassed the House Rules Committee to bring the bill directly to a floor vote, Boehner couldn't muster the two-thirds majority. If the Speaker had simply presented the bill through the Rules Committee, a simple majority would have sufficed.

It's performances like this one -- along with the unforgettable Continuing Resolution debacle -- that cast serious doubt on Boehner's leadership.

Let me put it bluntly: if the Speaker caves on the debt ceiling fight without serious concessions (like passing the Cut, Cap, Balance proposal tied to any debt ceiling hike), then he needs to be replaced. It's just that simple.


Update: Rose points out that the light-bulb repeal was passed a few days later by voice vote.

They DID, however, bring it back, without the super-majority poison pill, and with a simple majority VOICE VOTE, killed the lightbulb ban.

More than one way to skin a cat, as they say.

I agree with you that they MUST hold the line, CALL Obama on his bluff, DO NOT BEND, "HOLD! HOLD! HOLD!" Braveheart.

I believe the House voted merely to defund the enforcement of the ban, rather than overturning the ban. As such, it would have to be voted upon each year.

Yes,
The amended Energy bill HR 2354 still has to pass the Senate

Sorry the Big Boner knew what he was doing.

Since Billy Cunningham has admitted he is a good friend of boehner, I cannot listen to billy's radio show.