Mark Levin has repeatedly stated that Barack Obama is the first president in history who "thinks like a dictator". But does this statement go too far?

Consider the Wiktionary definition of the word fascism, which reads as follows:

A political regime, usually totalitarian, ideologically based on centralized government, government control of business, repression of criticism or opposition, a leader cult, and exalting the state and/or religion above individual rights.

Judicial Watch has unearthed documents that confirm the President's desire to suppress dissent. 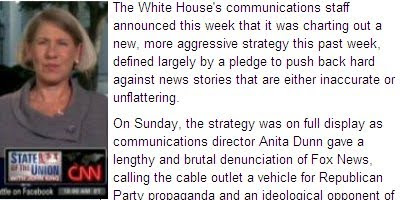 [These documents show] the Obama administration, contrary to its repeated denials, attempted to exclude the Fox News Channel (FNC) from a round of interviews with Treasury’s “Executive Pay Czar” Kenneth Feinberg. The documents, which include email exchanges within the Department of the Treasury and between Treasury and White House staff, also provide colorful evidence of an anti-Fox News bias within the Obama White House.

...According to press reports, the Fox News Channel was specifically excluded from joining the pool of reporters which precipitated a backlash among the networks and a reversal by the Obama Treasury Department.

According to The New York Times: “Fox’s television news competitors refused to go along with a Treasury Department effort on Thursday [October 22, 2009] to exclude Fox from a round of interviews with the executive-pay czar Kenneth R. Feinberg that was to be conducted with a ‘pool’ camera crew…”. Fox News Channel’s James Rosen reported this backlash forced the Obama administration to reconsider its position on the matter: “The Washington bureau chiefs of the five TV news network consulted and decided that none of them would interview Feinberg unless Fox was included, and the administration relented…,” reported Rosen. Ultimately, after other media representatives objected, Fox News Channel was allowed to participate in the interviews.

The Treasury Department’s official response, as detailed in back-and-forth emails uncovered by Judicial Watch, included a clear denial of any such plot to exclude Fox News from the interviews: “There was no plot to exclude Fox News, and they had the same interview that their competitors did. Much ado about absolutely nothing.” Moreover, in an October 23, 2009 email to New York Times reporter Jim Rutenberg, Jake Siewart, Counselor to Treasury Secretary Timothy Geithner, repeated the denial that there was an effort to exclude Fox News Channel: “Call me today on your Fox-Treasury report,” Siewart wrote. “Not true that there was an ‘effort to exclude’ Fox.”

However ..., internal Obama administration emails [show] that FNC was specifically singled out for exclusion. According to one October 22, 2009, email exchange between Dag Vega, Director of Broadcast Media on the White House staff, to Jenni LeCompte, then-Assistant Secretary for Public Affairs in the Treasury Department, Vega informs LeCompte that “…we’d prefer if you skip Fox please.”

...In an email on the night of October 22, 2009, commenting on a report by Fox News Channel anchor Bret Baier noting the exclusion of the network from the pool, Psaki writes to Compte and fellow White House colleagues, “…brett baier just did a stupid piece on it -- but he is a lunatic”.

The Treasury Department blacked out a key email regarding its refusal to make available Treasury Secretary Geithner for an interview on Fox News Sunday with Chris Wallace.

Just as they do with the rest of the Bill of Rights, the minor-league Chicago thugs occupying the White House could care less about the First Amendment. They despise free speech; they act like petulant children when criticized; and when confronted on controversial topics, they lie -- early and often.

Come to think of it, the Second Amendment equivalent of this report is Eric Holder's "Operation Fast and Furious".