Paging all materials scientists: Bernie has a question

Nagasaki 1945, after the atomic bomb: 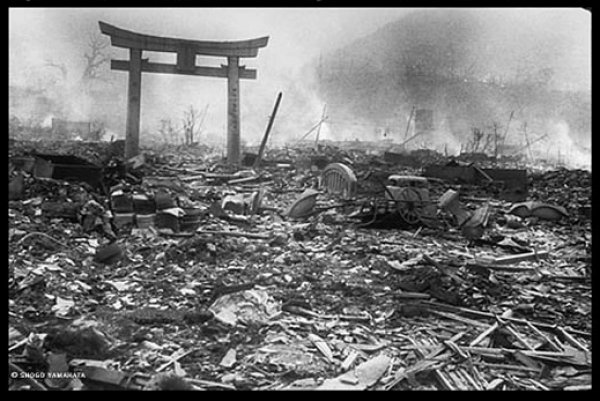 at 7:38 PM
Email ThisBlogThis!Share to TwitterShare to FacebookShare to Pinterest
Labels: Engineering

I don't know, but we need some to put in the spines of squish Repub's who won't hold the line on no more debt for our children and grandchildren.

If it's the same one, it's just wood. But they're remarkably resilient to a lot of stuff, the oldest Torii in Japan is pushing 900 years old.

Wood is a pretty tough and resilient material, for it's weight. Which should come as no surprise when you consider who designed it!

The secret is frontal area -- there's not enough surface for a shock wave to act upon, given its strength.

Like a flag pole, for instance, the opposite of a wall.

Don't let those other posters fool you, it's made of cockroach resin combined with SPAM, with a touch of feminism and socialism thrown in or as paint. It's a trade secret, so I don't have the exact particulars but I saw the page quickly.

That's teh same stuff they use for Black Boxes in airplanes