You don't need to be a math major to understand these devastating charts (slightly modified from the originals to depict the beginning of the "one-time, emergency Stimulus"):

...next time Obama or his allies in the press go back to the well and recite the well-worn verse that spending is all the other guy’s fault, take a look at the facts...

President Obama has steered a fiscal course that will lead to more spending and deeper deficits and ultimately to vastly higher taxes...

That John Boehner, who was put into power by the same Tea Party conservatives he condemns, could ignore the so-called "emergency Stimulus" package -- and leave it in all subsequent baseline budgets -- is a freaking moral outrage!

Fight! Why won't they fight? Because: (a) they're cowards; or (b) they like big government. Either answer is un-freaking-acceptable. Has Barack Obama given an inch in his battle to Cloward-Piven-ize America? No! Did Stretch Pelosi? No! Did Harry "Chuck Schumer writes my speeches" Reid? Hell, no!

Boehner had two nuclear weapons at his disposal. And he chose to use neither. He had the debt ceiling and a threat of a downgrade by the rating agencies. 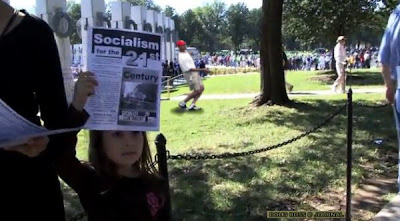 Because all of these pantywaists -- put together -- don't have the cojones of Michele Bachmann.

They're wimps who are selling out the American people -- just a tad bit slower than the Marxist, Democrat Left. We're headed for fiscal apocalypse and these feckless RINOs won't even put up a fight.

Let's not screw the pooch by fightening the moderates in the run up to the 2012 election.

I suggest you investigate the cowst, extent and makeup of the SSI and Medicaid programs. They absorb 33% OF SOCIAL SECURITY'S BUDGET. tHEY ALSO ARE FOR PEOPLE WHO HAVE NEVER PAID INTO SOCIAL SECURITY, AND USUALLY ARE NOT aMERICANS NOR WORKERS.