If this story is even partially accurate, then Mitch McConnell should be removed from his position in the Senate immediately. I don't care what the rules are for the GOP caucus. He needs to be removed, post-haste. 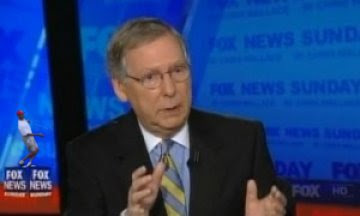 Here’s Rich Lowry: “It’s beginning to get out on the Hill. It’s complicated, but here is the gist as I understand it: Congress authorizes in legislation the president to submit a request for an increase in the debt limit in three tranches over the next year or so, with corresponding proposals for spending cuts; when the president submits his request, Congress immediately considers a resolution of disapproval; if the resolution passes, the president can veto it and–assuming his veto is subsequently upheld–he gets the increase in the debt limit. Got it? More later…"

Granted, McConnell cuts quite the handsome figure on the Beltway cocktail circuit. And he's so eloquent, debonair and articulate.

Sarc off. Enough is enough. If this story is legit, McConnell must go. Now.

McConnell is the leader of the Republican Senate! What does it tell you about the rank and file that they elected such an empty shell of a man?

If the Republicans in the House capitulate they will have extinguished the last ember of hope for a political solution.

Barney Frank has a freudian slip:

"I think there is a very real chance that the unrealistic view of many of these new right-wing Republicans and those who are intimidated by them could vote no [on raising the debt ceiling]," he said in an interview on Bloomberg Television.

That's doesn't even rise to RINO insanity, that's pure dem-speak. Tax and spend with no accountability.

Mitch "Fishface" McCoward and every RINO sissy old-guard scumbag will get voted out next time around for this giant steaming pile, this huge knife-in-our-back.

word to the wise there in the R senate halls, it would be a good start for some of you creeps calling yourselves senators to vote this fellow-creep out of his leadership position or it will be YOU who are gone when we get at you next election. 2012 and 2014 + Tea Party = that's what you cowards better fear more than the Marxist Liar in Chief.

Time for a third party and leaving the despised Dem-Publicans to their little bitch fest!