Using every arm-twisting, committee appointment, and earmark bribe in the book, John Boehner was able to slam his ridiculous faux debt-ceiling bill through the House, 218-210 a few minutes ago.

Let me be the first to predict what will now happen. 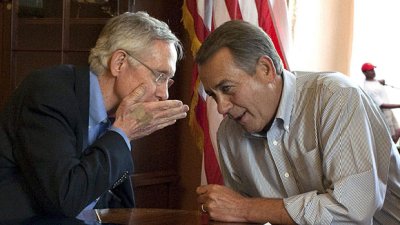 It will go to the Senate, where it will be rejected, rewritten, revamped and -- in general -- shredded by Chuck Schumer's mannequin, Harry Reid. In other words, it will become an even more pathetic "deficit reduction" vehicle than it was to begin with.

Then, with only hours to spare, it will be sent back to the House, whereupon the media and the Democrats -- but I repeat myself -- will predict total economic calamity should it not pass.

Boehner, the consummate Beltway insider, will panic, cry, and force it through the House, echoing the same predictions of complete economic collapse of Timothy Geithner. It will enforce no cuts, it will command no deficit reduction measures, and it will also grant Barack Obama unconditional permission to borrow another trillion dollars (or two) from our kids and grandkids.

And it will tiptoe this country right to the edge of fiscal collapse.

It's a game of hot potato, and Gump will have been handed the scalding hot potato with no time to spare.

Instead of hammering Cut, Cap & Balance through the House and Senate, the feckless GOP leadership will have folded like a deck-chair in a typhoon.

The imperative for 2012 could not be more clear: replace every RINO with conservatives in the primaries. Then obliterate the Marxist pod-people that have subsumed the husk of the once-proud Democrat Party. We have no alternative if we are to save this Republic.

1) Reid pushes for a vote to table it, passes with 51 votes, goes back to being useless.

2) Reid waffles, fudges, dithers and wavers, eventually brings it to the floor and generally attempts to mangle it beyond any recognition before passing it with great drama. At which point it will go to a House/Senate conference committee (As I recall), who are generally limited to using chunks of both bills that passed their respective chambers, and will cobble together some Frankenstein that looks only vaguely like either of the bills. By this point, the entire country has run out of canned Spam and having been exposed to endless amounts of Doom and Gloom, making them gladly accept anything.

3) Same as 2), only with "Rips out the entire contents of the House bill and replaces it with one he has been fermenting in the Senate outhouse, stops any amendments, and sweeps it out the door".

In short, it's Harry's turn to play clown over the weekend.

What an utter Dumbass boner is. You can't fix stupid. It is easy to believe in an insidious agenda and perfidy of corruption. What is difficult to comprehend is the criminal stupidity of these bums. The idiot had obama and the left in the palm of his hand. had them by the balls. And the chump not only choked, he abandoned the finest opportunity to bury this tyranny.
What a insidious quisling. He just made Benedict Arnold look like a saint.
With boner who needs obama reid and the commie rat bastard elitists?
King George had nothing on this circus of fools, crooks and traitors.
Boner sold our souls for what? What? What possessed this complete fool to sell out?
A round of golf with a mentally retarded psychopathic demi god?
Can you tell I'm blood spitting fighting mad?

if we had taken delaware and nevada and connecticut ...

The Republicans spent weeks negotiating against themselves. In the real world, one never does that, unless, of course, one is a chump.

I see anger and frustration from people that never followed politics before. It's like working for a small business while the owner is blowing the operating funds at the casino.

Boehner, resign now. Go home to your bar and cry.

With only an exception or two, I think every sitting Republican in office deserves to be primaried out. They don't listen to the people they are supposed to work for and they show this over and over and over again. Primaries for everyone!

Please explain. Exactly how do we hammer it through the Senate?