In a surprisingly candid interview with his hometown newspaper, Johnny Boehner admitted that his top priorities are Amnesty and not repealing Obamacare. In that order. Confident of his reelection, Johnny doesn't seem to remember that the citizens of his district have a choice: in this case, a very capable young conservative named J.D. Winteregg. 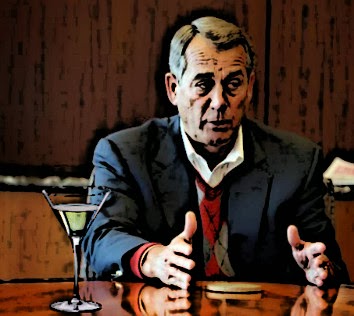 West Chester Republican John Boehner said he is confident he can win a third term as House speaker, despite his rocky three years in the post and his narrow re-election to that leadership slot in 2013.

“It won’t even be close,” Boehner said of his re-election as speaker...

On immigration: Boehner wants 'to get it done'

Boehner defended his approach to the politically dicey issue of immigration. In January, he and other GOP leaders outlined a set of principles to reform the immigration system. But shortly afterward, Boehner said he didn’t think he could move an agreement this year, arguing that Republicans didn’t trust Obama enough to implement border security measures.

On Monday, he told The Enquirer immigration was a key area of agreement between him and Obama and they talked about it at the White House last week. “He wants to get it done. I want to get it done...”

House Republicans will unveil an eight-to-10-point plan in two to three months that is aimed a [sic] fixing the Affordable Care Act, Boehner said.

Affordability is the top problem with the president’s health plan, he said.

• Boehner doesn't give a crap what the people of OH-8 think.

• Rather than protect America's defense budget, combat unemployment, push for Keystone XL, or investigate the most lawless administration in American history, Boehner's priority is Amnesty and handing Obama a political victory.

• And, once again violating a promise, Boehner has no intention of repealing Obamacare -- he's going to 'fix' it.

I urge you to donate time or money to J.D. Winteregg, Boehner's conservative challenger in OH-8.

Send a message to this disastrous "leader" that his time is up. It's time for him to enter the private sector.

The NSA must have something so damaging about Boehner that he had to capitulate!
Rumor has it that he knew about fast and furious - funneling weapons via CIA hub to Syria thru Turkey and, would explain his refusal to appoint a special prosecutor. There must be more but, we don't know!
He's a sell out and rhino indeed!

If Bo(eh)her does win the primary (yes, he will... ) conservatives should vote for the democrat. Better a demonrat from this district than a Bo(eh)her in the House...

He is not being forced to say these things, this is who he is: A corporatist.

He is worse than nothing, emblematic of establishment Republicans.

Health insurance was affordable before. Now it's even less so and he thinks them screwing around some more is going to fix things?
Have another cocktail Boehner and go away.

This JD is such a pathetic effort. I'm ashamed . Boehner is such a loser. Why can't Rep. Party hacks at least find an "adult" to challenge Boehner ?

Check out http://ashworthforcongress.com and http://gurrforcongress.com There are other candidates in the race. -/ Matthew Ashworth - Congressional candidate for Ohio's 8th District.

Why doesn't Boehner do the "honorable thing" and simply announce he's really a Democrat?