ARMS RACE AMONG THE BUREAUCRATS: Why has every government agency become militarized?

SANTA FE, N.M. — In late February, four federal agents carrying side arms with a drug-sniffing dog descended on the Taos Ski Valley in what was called a “saturation patrol.” 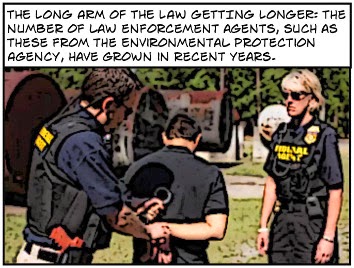 Authorities were working on tips of possible drug selling and impaired driving in the ski resort’s parking lot and surrounding area.

But the agents weren’t from the FBI, ATF or even the Drug Enforcement Administration.

Rather, the agents represented the U.S. Forest Service.

“It’s one of the untold stories about government,” said former New Mexico Gov. Gary Johnson, who lives in Taos, is an avid skier and has been a leading critic of the operation that turned up only a few minor infractions. “People don’t grasp the size and the scope of these entities and their law enforcement arms.”

It may come as a surprise to many U.S. taxpayers, but a slew of federal agencies — some whose responsibilities seem to have little to do with combating crime — carry active law enforcement operations.

That’s right, NOAA — the folks who forecast the weather, monitor the atmosphere and keep tabs on the oceans and waterways — has its own law enforcement division. It has a budget of $65 million and consists of 191 employees, including 96 special agents and 28 enforcement officers who carry weapons.

“There’s no question there’s been a proliferation of police units at the federal level,” said Tim Lynch, director of the Project On Criminal Justice for the Cato Institute, a libertarian think tank based in Washington, D.C. “To me, it’s been a never-ending expansion, a natural progression, if you will, of these administrative agencies always asking for bigger budgets and a little bit more power.”

It’s been estimated the U.S. has some 25,000 sworn law enforcement officers in departments not traditionally associated with fighting crime. According to the U.S. Office of Personnel Management, and in a tabulation compiled by the Wall Street Journal in 2011, 3,812 criminal investigators are working in areas other than the U.S. departments of Treasury, Justice, Defense and Homeland Security.

“We need a fuller accounting of exactly how many police units have proliferated in the federal government and how much it’s costing taxpayers,” said Lynch, who said he would like to see members of Congress ask agency officials direct questions about budget and staffing.

The Wall Street Journal reported that, in 2008, agents armed with assault rifles from NOAA, along with officers from the U.S. Fish and Wildlife Service, raided a businesswoman’s offices in Miami looking into charges that she was violating the Endangered Species Act by trading in coral.

“I felt like I was being busted for drugs, instead of coral,” Morgan Mok said afterward. “It was crazy.”

Mok said she obtained the coral legally and eventually paid a $500 fine and served a year’s probation for failing to complete the proper paperwork.

Why is a law enforcement arm necessary at NOAA?

“NOAA’s Office of Law Enforcement protects marine wildlife and habitat by enforcing domestic laws and international treaty requirements designed to ensure these global resources are available for future generations,” NOAA spokesman David Miller said in an email to New Mexico Watchdog, pointing out that the division has existed since 1970. “Our special agents and enforcement officers ensure compliance with the nation’s marine resource laws and take enforcement action when these laws are violated.”

As for the U.S. Forest Service, Special Agent Robin Poague defended the use of the agency’s law enforcement officers — called LEOs — in the Taos operation that resulted in harsh criticism from many residents.

“Rangers were armed when the Forest Service started 100 years ago,” Poague said. “We have a long history of law enforcement.”

Portions of the Taos Ski Valley sit on federal land. If there were suspicions of drug activity leading to the operation in February, why not use the DEA instead?

“U.S. Forest Service land is our primary responsibility, it’s not the DEA’s,” Poague told New Mexico Watchdog by telephone from his office in Albuquerque.

But many other federal agencies established their own after the Sept. 11, 2001, attacks.

In the aftermath of the attacks, the FBI shifted its attention to tackling terrorism, and Congress gave permanent powers to inspectors general in more than two dozen agencies.

By last count, 25 agencies with law enforcement divisions fall under their respective offices of inspectors general.

With their growth has come criticism that officers are becoming overly militarized.

“The whole notion of police operations these days, that they’re dressed to kill, that they’re up against an enemy, is wrong,” Johnson said. “Citizens are not the enemy.”

In 2010, the Department of Education defended its purchase of 27 12-gauge shotguns to replace old firearms used by its Office of Inspector General, the law enforcement arm of the department. DoE said the guns were necessary to help combat “waste, fraud, abuse, and other criminal activity involving Federal education funds, programs and operations.”

A year later, DoE Office of Inspector General special agents raided a California home at 6 a.m. to apprehend a man the department said was involved in criminal activity. DoE officials did not say why the raid was conducted, releasing a statement that said, “the office conducts raids on issues such as bribery, fraud, and embezzlement of federal student aid funds.”

In an email to New Mexico Watchdog, a spokeswoman for the DoE Office of Inspector General — the department’s law enforcement arm — reported it has a staff of 260 members, 90 of which are criminal investigators. Its budget is $57.7 million for fiscal 2014.

Defenders of the agencies say armed law enforcement provides a deterrent and that agents need to be armed to protect themselves against potentially dangerous criminals.

Endless debt and infinite money enables endless and infinite government. For a variety of reasons we must remove from government the power to create money out of thin air by which it:

1) puts us all in debt serfdom to pay the interest;

2) diminishes the purchasing power of the money we have saved;

3) buys votes with constituency groups that become dependent upon "benefits" that become a form of "in-kind income" that competes against paying jobs at the lower skill levels;

4) is able to finance going to war even when citizens don't support it;

5) expands bureaucracies, the things they regulate and the number of armed people they employ to find and arrest people who violate regulations they didn't even know existed, or even violating foreign laws. Recall that Gibson Guitar was raided for importing wood that lacked the proper label. Excess bureaucracy sent Abbie Schoenwetter to federal prison for shipping lobster in plastic instead of cardboard. Excess bureaucracy defines the drainage ditch in your back yard as a federally protected "navigable waterway" that you are forbidden to "disturb".

A government that can create its own money does not have to ask taxpayers for permission to spend more to feed its self-serving spending. When states start calling for a Convention to consider amendments to the Constitution, the first topic must be to restrain federal spending. A government that must live within its means is a government that must focus on the important things rather than imposing evermore intrusive laws and regulations having the weight of law.

We've been yelling about this since Obama's insane but revlealing "Civilian Security Force" speech years ago.
http://www.youtube.com/watch?v=Tt2yGzHfy7s

That troll Valerie Jarrett has a plan for martial law, has been working hard at it for 5 years, and will lead our boy-president, Hussein X, by his nose right into it.

Only the Second Amendment can save us. Perhaps a Tea Party sweep -- and the booting out of that @#$%sucker Boehner in 2014 will make that unnecessary.