SANTA FE, N.M. – For decades, it’s probably the most troublesome question facing education: Why are results for U.S. public school students so mediocre, despite the billions of taxpayer dollars spent?

Andrew Coulson thinks he’s got the answer: Because there is no discernible correlation between spending and outcomes.

“The takeaway from this study is that what we’ve done over the past 40 years hasn’t worked,” said Coulson, director of the Center For Educational Freedom at the CATO Institute. “The average performance change nationwide has declined 3 percent in mathematical and verbal skills. Moreover, there’s been no relationship, effectively, between spending and academic outcomes.”

The CATO Institute is a free-market think-tank based in Washington, D.C.

Coulson just released his study, “State Education Trends: Academic Performance and Spending over the Past 40 Years,” and he points to this chart that incorporates costs and the number of public school employees with student enrollment and test scores: 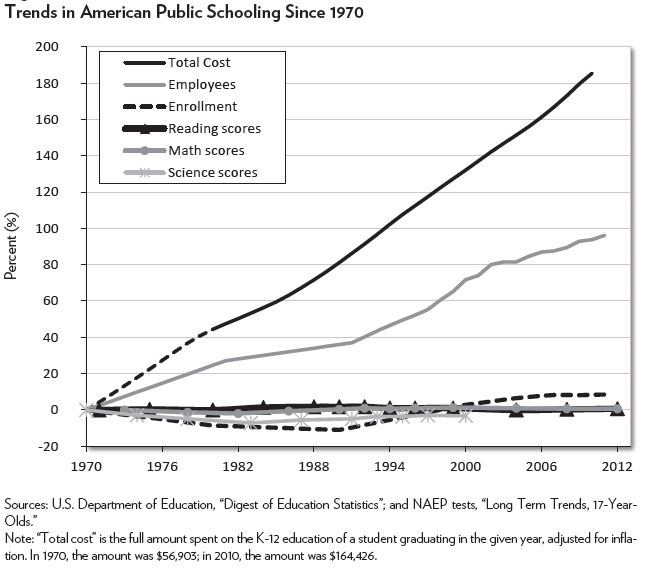 While spending has just about tripled in inflation-adjusted dollars and the number of school employees has almost doubled since 1970, reading, math and science scores for students have remained stagnant.

“That is remarkably unusual,” Coulson wrote in his study. “In virtually every other field, productivity has risen over this period thanks to the adoption of countless technological advances — advances that, in many cases, would seem ideally suited to facilitating learning. And yet, surrounded by this torrent of progress, education has remained anchored to the riverbed, watching the rest of the world rush past it.”

Coulson also looked at Scholastic Aptitude Test scores since 1972 and the numbers hold in each of the 50 states, including New Mexico: 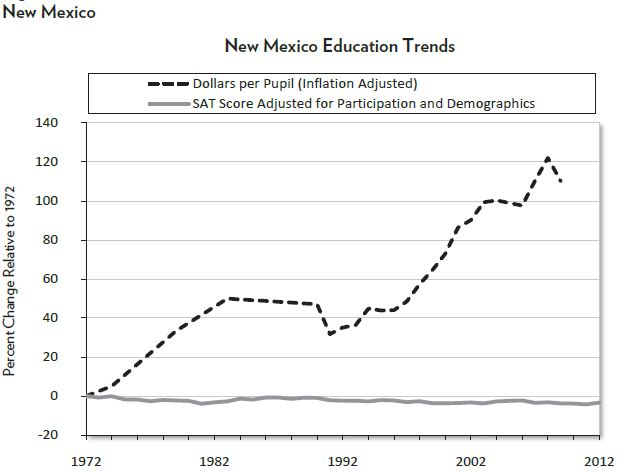 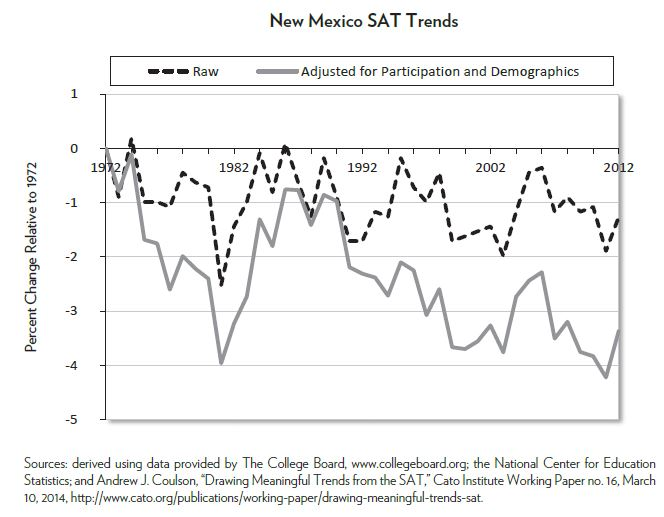 “It’s really impressive how disconnected spending and achievement have been in our state public systems,” Coulson said in a telephone interview with New Mexico Watchdog.

Correlations are based on a scale between zero and one, with the higher the number approaching 1.0 suggesting a perfect correlation between spending and results. Coulson’s figures came out well below 1.0 — at .0075. In other words, the numbers Coulson worked with would have to be more than 13 times stronger to suggest a perfect correlation.

“The 0.075 figure reported here suggests that there is essentially no link between state education spending (which has exploded) and the performance of students at the end of high school (which has generally stagnated or declined),” Coulson wrote in the 60-page report.

Click here to read the study, which includes charts for all 50 states.

Coulson also says that not only is there no evidence that spending increases improve scores, he says the statistics show that decreases in spending have no discernible effect in negatively influencing student scores.

“At one time or another over the past four decades, Alaska, California, Florida and New York all experienced multi-year periods over which real spending fell substantially (20 percent or more of their 1972 expenditure levels),” he wrote. “And yet, none of these states experienced noticeable declines in adjusted SAT scores.”

But if spending has no affect, then why do students at private schools, which charge tuition, perform better than students in public schools?

He pointed to a study he conducted in New Mexico’s neighboring state of Arizona in which Coulson said average per-pupil spending at private schools was about 66 percent of the cost of public schools.

National studies have shown the average per-pupil spending in the U.S. exceeds $11,000.

“There are many states in which you can find very many private schools for half that amount, certainly many for three-quarters of that,” Coulson said.

“The Cato report assumes that education money is spent the same way it was in the 1960s and ’70s,” the organization said in an email to New Mexico Watchdog. “In fact, schools have been mandated to provide many more services—special education, after-school programs, computer sciences, etc.—and today’s classrooms require much more technology than they did in the days of the mimeograph. Ignoring this would be like looking at the rising cost of the automobile without taking into account the fact that modern cars have safety systems and technology that didn’t exist in the days of the Model T.”

Coulson said he adjusted and controlled for the test scores.

“It does seem that it is quite readily possible to control SAT scores for the participation rate and variations in demographics to get an estimate of real, representative state performance,” he said.

K-12 education is 43%!!!!! of CO's budget-we clearly aren't getting our money's worth-85% of every dollar spent goes to administration.

If you don't think that the NEA is THE biggest threat this country has to deal with, you are effing out to lunch.

I've seen 3 voucher initiative attempts over the years make it to the ballot-tens of millions of dollars has poured in from out of state to defeat them.

Vouchers, which would almost immediately improve both the education available AND force public schools to up their game, are like sunshine to a vampire. The teacher's unions know their stranglehold on the education system would be broken and the millions of LoFos they're turning out would be a thing of the past.

Face it, without the Lofos, the dem party becomes irrelevant.
MM

This explains the difference between getting "a bang for your buck" and getting screwed from the same buck.