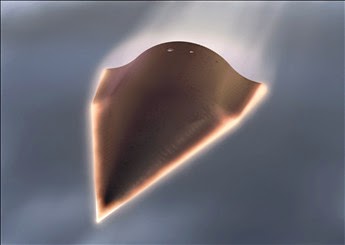 On Aug. 7, China conducted a second test of its hypersonic glide vehicle (HGV), known as the WU-14, yet another example of its relentless pursuit of high-tech weaponry as the United States abandons what the administration dismisses as Cold War weaponry.

The first test, conducted in January, saw China's HGV reach speeds in the vicinity of Mach 10, about 10 times the speed of sound. In the latest test, according to Internet reports, the WU-14 was the upper stage of a missile launched from the Jiuquan satellite launch facility in China's western Gobi desert.

Strategic experts say that the importance of this weapons program cannot be understated. The Washington Free Beacon quotes Rick Fisher, senior fellow at the International Assessment and Strategy Center, as saying:

As we noted after the January test, development of the WU-14 comes on the heels of China's deployment of a "carrier-killer," the DF-21D, a road-mobile ASBM. This land-based missile is designed to track and target our carrier battle groups in the western Pacific with the help of satellites and unmanned aerial vehicles similar to our drones, as well as over-the-horizon radar.

While the DF-21D is a traditional ballistic missile, the WU-14 operates in near-space and functions more like a plane, albeit on steroids. "The beauty of the HGV," Fisher told the Free Beacon, "is that it can perform hypersonic precision strikes while maintaining a relatively low altitude and flat trajectory, making it far less vulnerable to missile defenses."

China seems to be in a hurry. "The decision to conduct a second WU-14 test only a few months after its first test shows China's commitment to fast-tracking this program," said Lora Saalman, specialist on Beijing's HGV development at the Carnegie Foundation.

"China's test of a hypersonic glide vehicle proves that America's reticence about China's high-tech military developments diminishes American security by detracting from a needed political debate about real American defense requirements," Fisher has warned. "We are in effect disarming ourselves."

Certainly administration budget cuts and the effects of sequestration have done little to enhance America's military capabilities. In contrast, the New York Times reports, China in March announced a 12.2% rise in this year's military budget over 2013, which itself was 10.3% over the year before that.

These are the actions of an ascending power intent on challenging the U.S., first in the western Pacific and then globally. It is building a blue-water navy complete with its own carrier battle groups.

As we've also noted, China recently unveiled a new road-mobile intercontinental ballistic missile, the DF-41, that can deliver 10 nuclear warheads to any target in the U.S. We have moved in the opposite direction, recently deactivating an entire ICBM missile squadron.

China has begun throwing its weight around, recently establishing an air defense identification zone over the Senkaku Islands near Okinawa, claimed by Japan. It has also laid claim to the Spratly and Paracel Island chains in the South China Sea, the entirety of which it treats as Chinese territorial waters.

Beijing's goal is to push the U.S. out of the western Pacific, establish regional dominance along the Pacific Rim and then push outward from there. It is not preparing for more constructive dialogue with the United States.

"As Obama disarms America..." You gotta be kidding me. The U.S. has BY FAR the largest defense budget in the world; it's twice the size of everybody else's put together. Get real and stop pulling non-facts out of your posterior just to blamer Obama.

See my usual 'picture' comment here: http://normanhooben.blogspot.com/2014/08/not-since-pearl-harbor.html
You're welcome to use it any time you want...
Norm

'Barack Hussein Obama' (or whoever the hell he really is) and his handler Valerie Jarret are traitors.

They are allied with the lowest scum on earth, and is happily selling out our nation to them at wholesale prices.

What will it take for people to finally get that?

Unknown 11:07 - untrue. As a percentage of GDP the defense budget has never been lower.