CROOKS AND LIARS: Lois Lerner's Emails Exist -- and Always Have 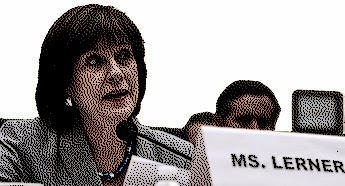 The Obama administration is now admitting that IRS Exempt Organizations Director Lois Lerner's emails, and all other "lost" IRS records for that matter, have not been destroyed. They are backed up, as are all other government records. To claim as the Obama administration originally did, that the emails were destroyed, is a bald-faced lie. We all always knew that of course. But there is nothing this administration won't do to change the subject when its shenanigans are uncovered. Now that they have been backed into a corner, they say it is too much trouble to recover the information. Another lie. To suggest that these backup systems are incapable of finding records is ludicrous. If records can't be recovered, why preserve them?

While the records exist and always have, it has now been revealed that Lerner destroyed her cell phone after learning she would be forced to appear before Congress. The IRS has admitted that the phone would have had the same emails that would have been on her computer hard drive that allegedly "crashed" and was later destroyed by the IRS. There needs to be serious criminal charges here.

The elections of 2014 and 2016 will determine the fate of this nation. We can't survive this level of corruption and deceit much longer, and a Hillary Clinton administration would quickly finish the job of destroying America that Obama has started.

All I can say is the Republican party had better take the recent presidential poundings to heart and nominate a Constitutional conservative. I have been eating shit sammichs since 1988 and I'm full up on them.

Jeb or Christie or now there's even talk of Ryan or ROMNEY again!!! Any of them and I take my top of the ticket vote elsewhere and Hillary can just effing go ahead and hasten the almost enviable SHTF.
MM

Choom Logic - Man, some court dude wants us to, like, find some albums or CDs or records or something. Who's got time for that? Awwww, we're outta Cheetos.

Run the clock out until there's nothing left but a nothing burger, then move the venue to Canada.

Nothing we all didn't know.

But the truth won't matter, so long as that extorted coward John Boehner remains as Squeaker.

Where is the revolt against this clown?

Someday we'll be able to retrieve those e-mails, after we invent electronic thinking machines to search largge databases.

I weep for the USA, I really do.