PRIORITIES: ISIS? No, "domestic terrorists" are the current focus of the Obama Department of Injustice

ISIS has issued a series of threats against the United States homeland, promising devastating terror attacks and stating "We will drown all of you in blood." 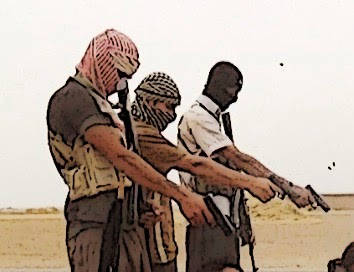 Sen. Jim Inhofe reports that ISIS is also developing a bomb to lay waste to an American city, experts say that "ISIS could easily cross the porous US-Mexico border," and Arabic documents have been found at the Texas border.

Yet President Obama has taken every possible action to ensure that the border remains unsecured and open to anyone willing to pay the Coyotes.

So ISIS isn't a priority for the Obama administration; what are their counter-terror targets?

As the Federation of American Scientists reported this week, "Domestic terrorism [is] again a priorty at [the] DOJ."

NSA whistleblower Bill Binney has an ominous warning about the behavior of the current White House; he likens Obama's new power (under the NDAA) to label citizens 'terrorists' the same rule the Nazis used in 1933.

“Look at the NDAA [National Defense Authorization Act] Section 1021, that gave President Obama the ability to define someone as a terrorist threat and have the military incarcerate them indefinitely without due process,” Binney said in a recent interview with DW while expanding on his testimony about NSA in Germany earlier this year.

“That’s the same as the special order 48 issued in 1933 by the Nazis [the so-called Reichstag Fire Decree]. Read that — it says exactly the same thing.”

Binney said such totalitarianism begins with governments expanding population surveillance and gathering intelligence on people and their various activities, before eventually transitioning to using that power and knowledge against them.

“That’s what’s happening — in terms of newspaper reporters, in terms of crimes,” Binney said. “That’s a direct violation of our constitution.”

Binney pointed to examples like New York Times reporter James Risen, who is fighting a Justice Department order to reveal a source, and former CIA officer John Kiriakou, who is serving a 30-month prison sentence for exposing torture and leaking the name of an undercover operative.

Obama and his apparatchiks like Eric Holder believe their political opponents are the terrorists, not ISIS.

What difference does it make?
Signed:
...Hillary Clinton...

The TSA (IRS?) Agents pictured for this segment are sure running through the handgun ammo. Glad to see there are no malfunction drills being performed, having the gun go "bang" every time the trigger is pulled is an important element of putting somebody in their place.