President Obama took 90 seconds away from golfing, vacationing and dancing* to issue a warning to Ferguson, Missouri police:

The executive director of the Fraternal Order of Police criticized President Obama Thursday for his remarks about law enforcement in Ferguson, Mo.

"I would contend that discussing police tactics from Martha's Vineyard is not helpful to ultimately calming the situation," director Jim Pasco said in an interview with The Hill. 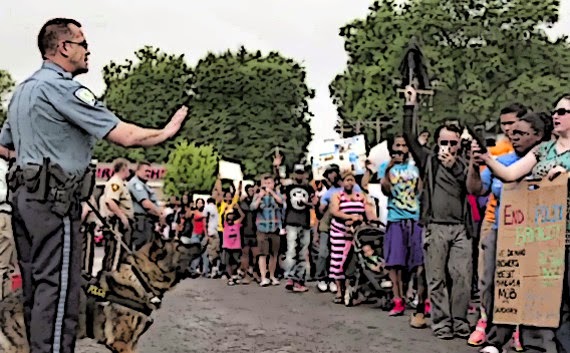 "I think what he has to do as president and as a constitutional lawyer is remember that there is a process in the United States and the process is being followed, for good or for ill, by the police and by the county and by the city and by the prosecutors’ office," Pasco added.

Pasco harkened back to 2009, when Obama criticized a Massachusetts police officer for arresting Harvard professor Henry Louis Gates, when he was attempting to break into his own home. Obama said the officer had “acted stupidly.”

"That is one where the president spoke precipitously without all the facts," Pasco said, adding that the current situation "is a much larger and more tragic incident."
Pasco said both police and members of the public are entitled to due process but said he is not convinced police have used excessive force in Ferguson.

"I'm not there, and neither is the president," Pasco said. "That is why we have due process in the United States. And this will all be sorted out over time. But right now, I haven't seen anything from afar — and maybe the president has — that would lead me to believe the police are doing anything except to restore order."

Someone acted stupidly, alright, but it ain't clear it's the po-po.

Mr. Pasco is mistaken. Obama
is not a lawyer.

All of these fools running our government are going to find out they are the ones out of control who need to be policed. They are the ones violating the law and have become utterly illegitimate.
Enough of their idiocy and meddling. It is they who are the root of the problems facing us as a society. They gull us, rob us, extort us, lie like the thieves and corrupt elitists they are, and they point guns at us if we don't submit, they force racism and a multitude of social engineering schemes down our throats.
Enough!
It is time to defy and revolt against this unacceptable state of affairs.
It is we the people who are legitimate in our affairs and business.
Throw them all in prison where the rest of the crooks are.

Obama can dance without a teleprompter? Whoda thunk it.