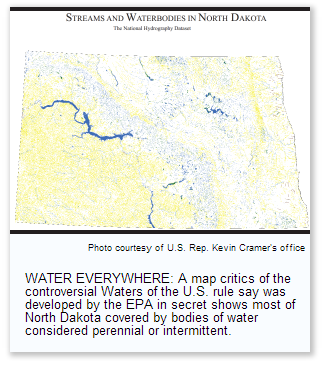 A farm group in North Dakota is calling the maps a “gall darn can of worms.”

“It is certainly alarming the EPA would develop these maps in secret and only release them after being confronted by members of Congress,” Cramer, a Republican, said in a news release accompanying his office’s release of the maps. “The EPA has been hiding information which could upset the public and jeopardize its massive power grab of unprecedented authority over private and public water.”


The maps were released by the EPA to the House Science, Space, and Technology Committee, on which Cramer serves. One map shows perennial bodies of water in blue and intermittent bodies of water in yellow. A second regional map including North Dakota, South Dakota, Montana, Wyoming, Colorado and Utah uses blue to show each state’s “wetlands inventory.”

On that map, nearly the entire state of North Dakota is in blue.

Critics of the proposed rule have suggested the EPA intends to use it to expand regulation far beyond permanent bodies of water to lands that hold water only some of the time.

“It doesn’t take much of a leap to conclude these highly detailed maps developed with taxpayer funds are for the purpose of enforcing this rule,” Cramer said.

But EPA officials say the maps have nothing to do with the Waters of the U.S. rule.

“Let us be very clear — these maps have nothing to do with EPA’s proposed rule or any other regulatory purpose,” EPA spokeswoman Liz Purchia told Fox News.

In New Mexico, one landowner has already experienced the federal government attempting to regulate wetlands that aren’t always wet. In 2013 a New Mexico landowner was prohibited by federal authorities from cleaning out a dry creek bed who cited the Clean Water Act.

Ultimately federal authorities backed down after the Pacific Legal Foundation filed a lawsuit on behalf of the property owners, but one group representing agriculture interests in North Dakota is afraid that won’t be the outcome if the EPA gets its way.

“It is a gall darn can of worms opening,” Pete Hannebutt, the director of public policy for the North Dakota Farm Bureau, told Watchdog.org. “They’ve been trying to reinterpret the rules for years, and we’ve been jumping up and down saying it’s not right.”

Hannebutt said Cramer has it right about the maps from the EPA.

“It could impact everything that we do in generally accepted farming practices, including digging a fence post hole, including running fence, including growing hay. It could have a huge impact on us,” he said.

Hannebutt said the EPA’s regulations could be so broad it could hinder a farmer’s ability to access his land.

“If you see where a farmer has a lane which gives him access to property … if water is pooling in that lane … the EPA is going to say that’s waters of the U.S. and he can’t cross that,” Hannebutt said. “A vigilante EPA officer could say you do not have access to this land.”

"Let us be very clear — these maps have nothing to do with EPA’s proposed rule or any other regulatory purpose,...”

A business associate bought a house on the edge of a small town. His back yard was cut in two by a drainage that only carried storm runoff. It was near to undercutting his foundation at one point.

He made inquiries about mitigation of the erosion. It turned that ditch was on a old topo map as a dashed blue line and get this: the local Army Corps of Engineers declared he could not "disturb" the "waterway" until a $10,000 engineering study had been done.

So, for any bureaucrat to say pay no attention to any official map we produce, is a lie, because dreadful and expensive enforcement follows such maps as surely as night follows day.

They will control all private property and destroy small farms anyway they can. Wells, irrigation ditches, dry washes will be controlled by Washington DC paper pushers. The Army Corps of Engineers as well as the EPA work hand in hand to promote this Agenda 21. There will be NO fracking ultimately.

This has been slowly going on for years, as the government continues to regulate every person, thing, and resource to the point of strangulation (after all, if Uncle Sam owns everything through regulations, then no need to adjudicate future disagreements between the States, as there won't be any!)

At least the lower 48 aren't Alaska, where the Feds control 70% of "their" land:
http://unsolicited.elementfx.com/blog/?p=574

If they can count it or measure it, they can regulate or tax it. That means they want to tax and regulate YOU, and me too, although I'm English we have the same Agenda21 reaching for our land and assets.