The Medieval World of Terror Theater 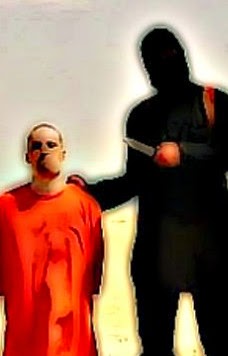 The beheading of American journalist James Foley by the Islamic State in Syria and Iraq was much more than an altogether gruesome and tragic affair: rather, it was a very sophisticated and professional film production deliberately punctuated with powerful symbols. Foley was dressed in an orange jumpsuit reminiscent of the Muslim prisoners held by the United States at Guantanamo Bay. He made his confession forcefully, as if well rehearsed. His executioner, masked and clad in black, made an equally long statement in a calm, British accent, again, as if rehearsed. It was as if the killing was secondary to the message being sent.

The killing, in other words, became merely the requirement to send the message. As experts have told me, there are more painful ways to dispatch someone if you really hate the victim and want him to suffer. You can burn him alive. You can torture him. But beheading, on the other hand, causes the victim to lose consciousness within seconds once a major artery is cut in the neck, experts say. Beheading, though, is the best method for the sake of a visually dramatic video, because you can show the severed head atop the chest at the conclusion. Using a short knife, as in this case, rather than a sword, also makes the event both more chilling and intimate. Truly, I do not mean to be cruel, indifferent, or vulgar. I am only saying that without the possibility of videotaping the event, there would be no motive in the first place to execute someone in such a manner.

In producing a docu-drama in its own twisted way, the Islamic State was sending the following messages:

Welcome to the mass media age. You thought mass media was just insipid network anchormen and rude prime-time hosts interrupting talking heads on cable. It is that, of course. But just as World War I was different from the Franco-Prussian War, because in between came the culmination of the Industrial Age and thus the possibility of killing on an industrial scale, the wars of the 21st century will be different from those of the 20th because of the culmination of the first stage of the Information Age, with all of its visual ramifications.

Passion, deep belief, political protests and so forth have little meaning nowadays if they cannot be broadcast. Likewise, torture and gruesome death must be communicated to large numbers of people if they are to be effective. Technology, which the geeky billionaires of Silicon Valley and the Pacific Northwest claim has liberated us with new forms of self-expression, has also brought us back to the worst sorts of barbarism. Communications technology is value neutral, it has no intrinsic moral worth, even as it can at times encourage the most hideous forms of exhibitionism: to wit, the Foley execution.

We are back to a medieval world of theater, in which the audience is global. Theater, when the actors are well-trained, can be among the most powerful and revelatory art forms. And nothing works in theater as much as symbols which the playwright manipulates. A short knife, a Guantanamo jumpsuit, a black-clad executioner with a British accent in the heart of the Middle East, are, taken together, symbols of power, sophistication, and retribution. We mean business. Are you in America capable of taking us on?

It has been said that the murder of Czar Nicholas II and his family in 1918 in Ekaterinburg by Lenin's new government was a seminal crime: because if the Bolsheviks were willing to execute not only the Czar but his wife and children, too, they were also capable of murdering en masse. Indeed, that crime presaged the horrors to come of Bolshevik rule. The same might be said of the 1958 murder of Iraqi King Faisal II and his family and servants by military coup plotters, and the subsequent mutilation of the body of Iraqi Prime Minister Nuri Said by a Baghdad mob -- events that presaged decades of increasingly totalitarian rule, culminating in Saddam Hussein. The theatrical murder of James Foley may appear as singular to some; more likely, it presages something truly terrible unfolding in the postmodern Middle East.

To be sure, the worse the chaos, the more extreme the ideology that emerges from it. Something has already emerged from the chaos of Syria and Iraq, even as Libya and Yemen -- also in chaos -- may be awaiting their own versions of the Islamic State. And remember, above all, what the video communicated was the fact that these people are literally capable of anything.

Terrorism as Theater is republished with permission of Stratfor.

HA these guys are pikers-"Can we take them on" ??Once the real killing starts, and it will, there's not going to be too many of these assholes left.

Unfortunately, it's going to take a horrific event on our soil.

Oh and Obama will be gone because he sure a s hell wouldn't do what's necessary.
MM