OBAMA'S MANUFACTURED BORDER CRISIS: If This Isn't Treason, Then What Is? 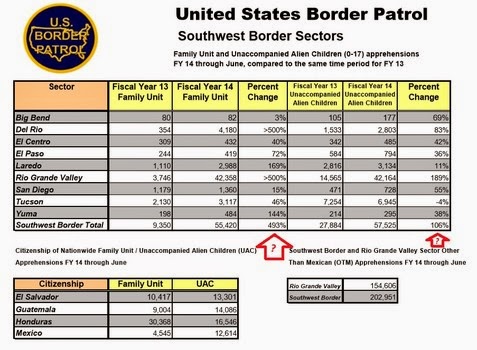 The Conservative Treehouse has done yeoman's work exposing the Obama administration's many machinations over the manufactured border crisis. In a report published at Accuracy in Media earlier this month, I described how the Unaccompanied Alien Children (UAC) program of the Department of Health and Human Services has exploded, spending almost $700 million so far this year, more than double that of 2013. Much of the information described in that report was initially dug up by the Treehouse.

As we described in the report, many of these "children" were not in fact children, but young men and women, many of whom were gang members or being actively recruited by gangs. Largely unreported were the 200,000 plus illegal alien families accompanying these youths. The Treehouse has now uncovered evidence of deliberate manipulation of the UAC numbers conducted by the Obama administration.

The U.S. Border Patrol has reported apprehension of 57,525 UACs in 2014, almost double the 2013 number. However another agency, the Executive Office for Immigration Review is tasked with actually confirming these numbers. It counts a total of 20,814, only slightly more than 2013, (20,778), and once again, most of these are not the young children the media has been showing heart-rending photos of. The fact is that there is no crisis of young, unaccompanied children flooding the border. There are entire families flooding the border.

It is difficult to know what to make of all this. Likely the Obama administration wants it that way. The AIM report described how Baptist Child and Family Services alone has received $280 million UAC grants in 2014. A leftist group connected to the radical amnesty activist group National Council of La Raza obtained over $122 million. If the number of unaccompanied children has not increased to justify this vast increase in funding, what did they receive all the money for? Were these monies actually reserved to place entire families? Now we know why the administration was so secretive about how many "children" were being housed at facilities around the country and where they were being sent. They weren't children at all. Have you noticed that there is not so much news in the media today about the border "crisis"? That is because the crisis in housing for nonexistent youths no longer exists, if it ever did.

As initially reported, children with families were being shipped to destinations of the family's choosing, quite obviously in anticipation of resettling here. If that report was accurate, then 240,000 family members have already been effectively amnestied. They won't be going home any time soon, if ever.

That was the deception. At least one of them. While we were watching the unfolding saga of unaccompanied children at the border, thousands of adults from all over the world, including terrorist nations, communist nations and Ebola infected nations, were crossing our southern border elsewhere. So far in 2014 there have been a total of 4,951 Border Patrol apprehensions of Third Country Nationals from nations excluding Mexico and the countries of Central and South America -1,803 from China alone. Does this mean that they are apprehended, jailed and sent home? Nope! According to Customs and Border Protection (CBP):

Aliens who enter without inspection between ports of entry and are apprehended by U.S. Border Patrol (BP) of CBP may be removed, permitted to return to their country, or issued a Notice to Appear (NTA) before the immigration court. Aliens issued a charging document are either transferred to ICE for detention pending a hearing or released on their own recognizance.

There have been an additional 13,235 Customs and Border Protection Office of Field Operations "inadmissibles." These are people who apply for entry but are classified as "inadmissible." Does that mean they are turned back at the border? Nope! According to CBP (PDF):

Applicants for admission determined to be inadmissible may be permitted to voluntarily withdraw their application for admission and return to their home country, processed for expedited removal or referred to an immigration judge for removal proceedings.

I concede: our immigration system is indeed completely broken. It does need serious reform. As it stands right now, we will let anyone in!

So if the border crisis has gone away, why is Obama still hyperventilating about immigration “reform” and threatening "administrative amnesty" for up to 5 million? The answer: Democrats need those voters now more than ever. More and more Americans realize just how badly we are being ripped off. More and more, Americans are realizing just how far Obama will go to risk terrorist attack from unidentified foreign nationals penetrating our border in order to import the Democrats' most promising future demographic.

If this isn't treason, what is?

This article first appeared at Examiner.com.

Impeach, try, convict and execute. But, hold a lottery first. Winner gets to beat the bastard bloody with a bat.