Second Amendment: An African-American single mom on her way to a birthday party for one of her kids faces 10 years in prison for straying into the Garden State carrying a firearm in her purse licensed in Pennsylvania. 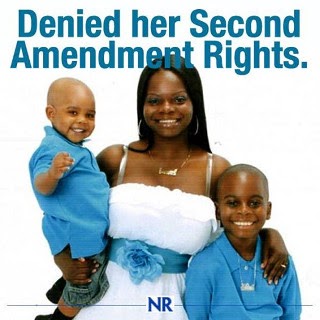 Shaneen Allen is less well-known than Michael Brown, the man shot by police in Ferguson, Mo., and it's doubtful Jesse Jackson or Al Sharpton will pay her a visit anytime soon. They're busy elsewhere. A mother exercising her Second Amendment right not only to keep but to bear arms to protect her family is of little interest to them.

Allen is a resident of Pennsylvania and has a Pennsylvania right to her permit. In October 2013, she was pulled over by New Jersey state troopers for an "unsafe lane change."

When one trooper approached and asked for her identification, she remembered she had left her newly acquired firearm in her purse, which can happen to a single mom who works more than one job and leaves her home at odd times of the day.

She had obtained the firearm after two robberies raised her concern for her and her family's safety.

She was arrested and charged with illegal possession of a firearm because she didn't realize that New Jersey is one of 20 states that does not recognize Pennsylvania's permit. Ignorance of this law is apparently no excuse for New Jersey authorities failing to see that here was someone who obtained a firearm to prevent crime and not to commit one.

"I got pulled over by the police," Allen told Fox News' Martha MacCallum last week.

"As I let them know that, you know, that's when they started to, you know, lock me up and told me to step out of the vehicle and put cuffs on me."

Prosecutor Jim McClain, under New Jersey law, could have essentially given Allen a warning and a pass, treating it merely as a misdemeanor and sending her to municipal court or letting her enroll in one of the diversionary programs that New Jersey has established for peaceful first-time offenders.

Yet he chose not to, and the unanswered question is: Why not?

Allen's case mirrors that of Brian Aitken, a 27-year-old Colorado man who was divorced and chose in 2009 to move to New Jersey, where his ex-wife had moved, to be near his son. As Radley Balko told the story in Reason Magazine, police confronted Aitken after an innocent call by a mother concerned about her son's safety and state of mind.

When they searched his car, they found his handguns, which were legally purchased in Colorado, locked, unloaded and stored in the trunk, as federal and New Jersey laws require for guns in transport.

The police arrested Aitken anyway, charging him with unlawful possession of a weapon.

New Jersey Gov. Chris Christie eventually commuted Aitken's sentence, and he should pardon Shaneen Allen. Neither is a criminal and neither should have been charged in the first place.

All states should be required to respect the gun laws of other states and respect the rights of citizens to legally own guns, which is in the U.S. Constitution, just as they are being asked to with gay marriage, which is not.

All jurisdictions should also know why private citizens obtain defensive firearms in the first place and do a better job of determining just who are the real criminals and who are not.