Jihad In America: Terroristic tweets underscore the Islamic State's global reach. It has an army of Western passport holders, and an open southern border to cross. It's not only coming to the U.S.; it's already here.

Slain journalist James Foley studied his craft in the Chicago area, earning a master's degree from the Medill School of Journalism at Northwestern University. For a time he was a teacher in the Cook County Jail boot camp program. He was familiar with the streets of Chicago. So, apparently, is the Islamic State that beheaded him. 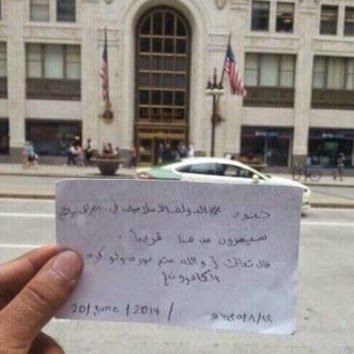 An anonymous tweet has an attached photo showing a message written in Arabic. The note is dated June 20 and is being held up in front of the Old Republic building on Chicago's Michigan Avenue. Dubbed the Magnificent Mile, a shopping mecca, Michigan Avenue is another symbol of what, from a radical Islamist perspective, is wrong with Western culture and civilization.

Certainly Islamic State has proved adept at using social media to threaten its future targets and recruit sympathizers and members.

It would be easy to dismiss this as a stunt with no real significance, except that it echoes promises that Islamic State and its sympathizers have already made, including to fly their black flag over the White House, currently occupied by another former Chicago resident, President Obama. Also attached to this tweet is a photo of the White House.

"Many terror organizations refer to Chicago as Obama Town," according to CBS Chicago security expert Ross Rice, a former FBI agent assigned to the Windy City. Islamists remember that Osama bin Laden was killed on Obama's watch as drone strikes disrupted and decapitated their terrorist networks, he notes.

In a joint bulletin issued with the FBI on Friday, the Department of Homeland Security warned local, county and state law enforcement agencies to be on the lookout for signs of activity by the IS and its sympathizers. We are reminded of the Tsarnaev brothers and Tamerlan Tsarnaev's time spent in the terrorist-infested Russian republic of Dagestan before returning to bomb the Boston Marathon last year.p>


There is apparently is no shortage of American recruits for terrorism. American suicide bomber Moner Mohammad Abu-Salha, who grew up in Florida, returned to the U.S. undetected after receiving terrorist training in Syria. He later journeyed back to Syria, where he allegedly drove a truck packed with explosives into a crowded restaurant.

There is also no shortage of Western passport holders who have joined Islamic State.

"They are one plane ticket away from U.S. shores, and that's why we're concerned about it," Rep. Mike Rogers, R-Mich., chairman of the House Intelligence Committee, said Sunday.

As many as 3,000 members of IS have U.S. or European passports and could slip into America without notice, Rep. Mac Thornberry, R-Texas, vice chairman of the House Armed Services Committee, told CNN on Friday.

British ambassador to the U.S. Peter Westmacott, in the aftermath of Foley's beheading, noted that the executioner seemingly had a British accent and is possibly a British citizen. Westmacott also said that roughly 500 Britons have joined Islamic State, with British authorities apprehending 60 or 70 of them who returned home with intent to do harm.

Islamic State might not even need passports to enter America. In fact, as we noted earlier month when we reported that five IS-linked American Muslim converts had been arrested, they are already here.

"I think there is the obvious great concern because of the condition of the border from the standpoint of it not being secure and us not knowing who is penetrating across, that individuals from ISIS or other terrorist states could be" in the U.S., Texas Gov. Rick Perry said at an event held by the Heritage Foundation and National Review in Washington, D.C.

They might even be taking in a Cubs game.