PHILADELPHIA'S "FORFEITURE MACHINE": $64 Million Confiscated From Citizens With No Due Process

In March, Chris Sourovelis’ son was caught selling $40 of heroin to an undercover police officer.

Officers from the Philadelphia Police Department responded by raiding the Sourovelis’ north Philadelphia home, with guns drawn — one of them pointed at the head of the family dog — and found small amounts of the drug in the 22-year old’s bedroom. Chris and his wife, Amy, knew nothing of their son’s drug habit and it was the first time he had been busted for possessing narcotics. 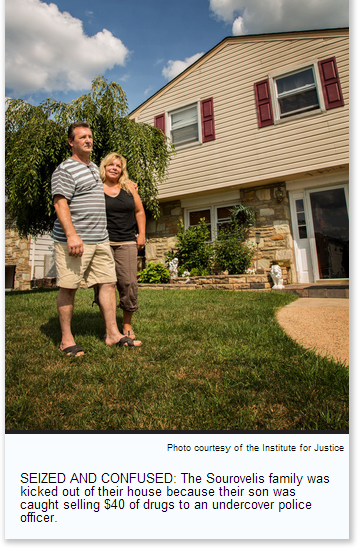 A few weeks later, the cops were back to tell the Sourovelis family they had to gather their things and leave the property. The home was being confiscated under civil forfeiture rules, leaving the family homeless and forced to sleep on a neighbor’s couch.

To get their home back, Chris and Amy Sourovelis had to agree that their son would no longer live with them. Even though they agreed, the family could still lose their home permanently as the case winds through the city’s legal system.

Now, the Sourovelis family is one of a group of people bringing a class-action lawsuit against the Philadelphia Police Department and the city’s District Attorney’s Office, alleging that law enforcement in Philadelphia is routinely and repeatedly violating the due process rights of the city’s citizens.

“I did not do anything wrong, yet Philadelphia is trying to take my house,” said Chris Sourovelis, in a statement released by the Institute for Justice, a libertarian law firm involved in the case. “If this can happen to me and my family, it can happen to anybody.”

And it does, more often than might be expected.

From 2002 through 2012, law enforcement in Philadelphia seized more than 1,000 homes, 3,200 vehicles and $44 million in cash, according to data obtained by the Institute for Justice through an open records request.

Those assets provided more than $64 million in revenue to the Philadelphia DA’s office, because Pennsylvania law allows local law enforcement to keep the proceeds from forfeited property after it is seized and resold.

Property can be seized by police without requiring a conviction — or even a criminal charge, in some cases — and the proceeds have padded the Philadelphia District Attorney’s bottom line by 20 percent during the past decade.

Attorneys working on the lawsuit say the city has set up a “forfeiture machine” to take advantage of the perverse incentives created by the law.

In a statement provided to the PA Independent, the Philadelphia District Attorney’s Office defended its civil-asset forfeiture policies as part of the city’s overall effort to control the use and distribution of drugs. The office said it uses forfeiture actions against “cars and money that have been used to fuel the drug trade.”

“In all of these efforts, we follow applicable law to protect the rights of all those involved — not only drug deals and those associated with them, but law-abiding citizens who are negatively affected by them,” said Tasha Johnson, communications director for the District Attorney’s Office.

Johnson declined to answer further questions about the lawsuit, as the legal matter is ongoing.

But Beth Grossman, chief of the city police’s Public Nuisance Task Force for the District Attorney’s Office, did address the question of the perverse incentives for law enforcement during an interview last week on WPHT-1210.

“I think it’s a fabulous law, frankly, because it deters drug trafficking,” said Grossman, whose perspective might be slightly skewed by the fact part of her salary is paid by the district attorney’s civil forfeiture revenue. “We just want the drug dealing to stop within that particularly property … because it makes everybody suffer.”

Lawyers working on the case say the city makes property owners suffer plenty as a result of the law. Once property is seized, the original owners have the burden of proof to show the property wasn’t involved in a crime.

For that, and a variety of other reasons, attorneys challenging the civil-asset forfeiture laws say the law violates due process guaranteed in the U.S. Constitution.

“Allowing law enforcement to keep the proceeds of forfeited property gives them a perverse financial incentive to use civil forfeiture,” said Scott Bullock, senior attorney for the Institute for Justice. “No one in the U.S. should lose their property without being convicted of, or even charged with, any crime.”

That process takes place in civil court, not criminal court. Among other things, that means no free defense attorneys for the poor and no constitutional protections against self-incrimination.

The Sourovelis are finding out just how difficult that process can be. They already have made five visits to a courtroom in City Hall that’s been specially set up to handle the city’s plethora of forfeiture cases.

For many who have property seized by police, the expense and risks of trying to get it back are simply not worth it.

The Sourovelis case is a bit of an outlier, but only because of the size of the property police targeted for forfeiture. The Institute for Justice says Philadelphia carries out more than 6,000 forfeitures per year, with the average forfeiture totaling only $178.

Targeting small amounts of money makes sense, because of how the asset forfeiture process works. It’s irrational to spend thousands on legal fees for a civil trial if you’re trying to recover only $178 in property.

In Philadelphia, the District Attorney’s Office will pursue forfeiture actions even if the property owners are found not guilty in any criminal proceeding, Grossman said last week.

There is a growing effort to limit law enforcement’s power to seize property. Minnesota passed a law earlier this year to require a conviction before property can be seized.

In Philadelphia, residents like the Sourovelis family will have to continue to take their chances in court — whether they have committed a crime or not.

This is flat out sick. I would love to see that law traced back to who initiated it and who passed it, then sue all initiators of that "law".

I wonder what would have happened if these people were renting a property. Would the police have seized it?

This isn't new, it's been going on for 30+ years, it's just now getting so egregious that it's hard to ignore.

In 1988, I lived in St. Petersburg, FL. There was a case there of a guy who owned a new Corvette. He got pulled over, and the police didn't believe him when he told them that the white powder on his center console was spilled flour. It turned out it was, but police didn't give him back his car until he sued for it's return after having seen it being driven around town several times (the cops kept it for 6 weeks). He then sued for rental fees, and won.

Then there was the husband/wife long haul trucker pair that was acquitted for drug trafficking because they were able to prove that someone they didn't know had hidden drugs on their rig without their knowledge while they were eating a meal in a truck stop (this is common with traffickers, they hide their stuff in someone else's vehicle and then follow that vehicle and recover the contraband later, having eliminated THEIR risk of being caught with it). But the government still kept their rig, because "it was guilty of transporting drugs". Of course, their rig was their sole means of earning money, which made fighting to get it back difficult.

And even when you do get it back, the government has been known to be spiteful about it. I read of a case where a guy who ran a charter company (airplane) had his plane confiscated because his customer, who had told him he was transporting printed records (plus the customer) from Vegas to Los Angeles actually had illegal drugs in the boxes. His plane was met at the arrival airport by DEA officials, who arrested him and his customer, and confiscated his airplane. He managed to avoid conviction for trafficking (I don't recall if he was acquitted or the charges got dropped), but they kept his plane. He sured to get it back, and eventually won. When he went to pick up the plane, the DEA had COMPLETELY disassembled it. Any two parts that were held together by screws, or nuts and bolts, had been disassembled, even the engines (it had 2 piston engines) were disassembled, even though they couldn't have had anything in them as they were WORKING when they landed (not to mention that engine oil contamination would have made any drugs hidden in them impossible to sell). For those that don't know, airplanes are required to have annual inspections, and one of the things inspected for is corrosion. As a result, there are inspection ports in the wings and fuselage that allow you to see the entire inner structure without having to disassemble the airplane. But they disassembled it anyway. The cost to reassemble the plane was greater than the replacement cost.

Then there was the case of the minister in Boston who died while handcuffed and lying on the floor of his parsonage while police searched it for drugs that an anonymous phone tip supposedly told them were present. The extent of the police's investigation into this tip prior to the raid? They called the county clerk to find out what the tax assessed value of the property was, so they could decide if it was worth their while to try to confiscate it. They were unaware it was owned by a church until after the minister had died (all they had to do was ask the clerk who the owner of record was, and they would have found out it was a parsonage, but they couldn't even be bothered to ask that question).

All these stories are from 20+ years ago. The war on (some) drugs has been used for 40+ years to confiscate the property of innocent people. It is long past the time where it needs to stop.

Is this the freedom George Bush said they hate you for?