UNREAL: Gov. Jerry Brown Reveals That California Has Just Seceded From the Union and is Now Part of Mexico 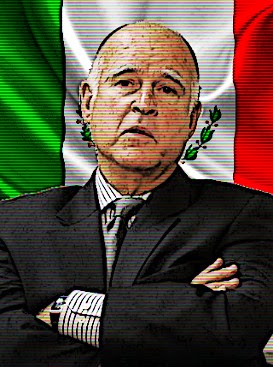 According to the Los Angeles Times, while introducing Mexican President Enrique Peña Nieto, who said America is "the other Mexico," Brown "spoke about the interwoven histories of Mexico and California." He "nodded to the immigrants in the room, saying it didn't matter if they had permission to be in the United States."

"You're all welcome in California," Brown reportedly said.

Even during the border crisis, Brown reportedly vowed "to find ways to shorten long waits at the Tijuana-San Diego international border crossing," saying, "If we can put a man on the moon, we can put a man from Mexico to California in 20 minutes."

In 2012, 28% of Californians were born outside the United States, according to The New York Times. Hispanic voters reportedly "made up 19.2% of California voters" in 2010. And according to Pew Research, Latinos make up nearly 40% of the state's population and have made California "only the second state, behind New Mexico, where whites are not the majority and Latinos are the plurality."

Even though the University of California has admitted a record number of Hispanics, the Latino Caucus has vowed to make affirmative action and bilingual education top legislative priorities.

Read the last two paragraphs again. It's true: California has seceded to Mexico. It's as if Matt Bracken's tremendous novel Domestic Enemies: The Reconquista (the second of his awesome Enemies Foreign and Domestic trilogy) is clairvoyant non-fiction.

Isn't it interesting: the Supreme Court ruled that Arizona couldn't enforce federal immigration law because it claimed that the Executive Branch has so-called "plenary authority".

Yet progressive loons like Jerry Brown can rewrite federal statutes and annex an entire state to a foreign country?

This Democrat Party is completely out of control. It has succeeded in its century-long quest to fundamentally transform destroy our form of government.

At least Democrats are actually trying to govern. The Republican party's modus operandi has been "destroy anything that resembles a functioning government, then complain that government doesn't work."

While I wish third parties were viable, (A real Libertarian Party, Green Party, and Working Families Party would be nice, even Ross Perot's failed Reform Party would be a bit of fresh air,) the sad reality is that the Democrats and Republicans have colluded to exclude any real competition - in the mean time they are each becoming more and more extreme.

But between the two extremes, one is actually attempting to HELP PEOPLE, while the other is doing its best at destroying people. I'd rather go for the one that is trying to help - even if it's misguided and badly run. It's better than actively trying to destroy.

What mental institution did you just escape from?