WHO FUNDED THE HAMAS TERROR TUNNELS? Eh, That Would be Hillary Clinton

There's a reason that the greatest Secretary of State ever is trying to distance herself from Barack Obama. She's hoping no one remembers that she led the freaking State Department from 2009 to 2013.

Dennis Ross, the senior Mideast policy adviser to Secretary of State Hillary Clinton from 2009 to 2011, has admitted that it was he who was assigned the task of pressuring Israel to ease up on its military blockade of Gaza. 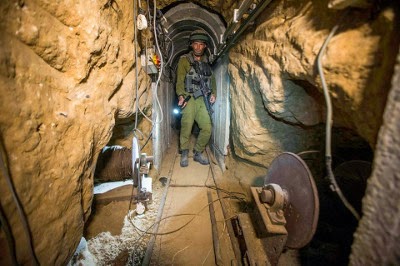 “I argued with Israeli leaders and security officials, telling them they needed to allow more construction materials, including cement, into Gaza so that housing, schools and basic infrastructure could be built,” Ross revealed in the Washington Post on August 10. “They countered that Hamas would misuse it, and they were right.”

Not that Hillary’s State Department had been acting independently of the White House on the issue of cement. For example, Vice President Joe Biden told interviewer Charlie Rose on Bloomberg TV in 2010: “We have put as much pressure and as much cajoling on Israel as we can to allow them to get building materials” and other forbidden items into Gaza.

But now that Mrs. Clinton is attempting to distance herself from the president’s debacles in foreign affairs, Ross’ admission shows that it was she who sent her personal envoy to push for a policy that ultimately enabled Hamas to build the terror tunnels.

...Instead of lethal purposes, the materials used for each tunnel could have built 86 homes, or 19 medical clinics, or seven mosques, or six schools. But Hamas had other priorities.

And Secretary Clinton consciously turned a blind eye. Just as she turned a blind eye to other aggressive and anti-peace behavior by the Palestinians, such as the Palestinian Authority’s sheltering of known terrorists, its payments to imprisoned terrorists, the anti-Israel and anti-America propaganda that fills the PA-controlled media, and the anti-Semitic hatred in the textbooks used in the PA’s schools.

What are the real-life consequences of ignoring such Palestinian actions? An entire generation of young Palestinians have grown up incited to hatred of Jews and Israel, and glorifying terrorists as heroes and martyrs.

I'm sure all Democrats approve of Hillary's actions, since none have spoken out against this nefarious evil.

Hitlery the Enabler, it's not a new role for her. It's almost enough to forgive Bill for diddling Monica.

This closest this bozo will ever get to the White House is as a tourist standing outside.

I do hope you are correct, and that awful woman never gets another top job.