ROACH MOTEL: 3 Hamas generals were in a tunnel 30 meters underground when they were squashed like bugs

Via Israel Matzav comes this intriguing report, one certain to strike terror into the hearts of Hamazis everywhere.

Report: 3 slain #Hamas commanders were in secret meeting inside 30-meter deep tunnel beneath home belonging to Kullab family in Rafah.

If you have any doubts that Thursday's hit of three senior Hamas commanders in Gaza indicates that Israeli intelligence has penetrated to the highest levels of the Hamas command, read the article below in conjunction with the tweet above from Khaled Abu Toameh.


This was not just another strike, not just another assassination. The killing of the three constituted an indication that something in the intelligence discipline at the very top of the Izz ad-Din al-Qassam Brigades has cracked.

The Shin Bet, as the intelligence behind the strike, and the IDF, as the operational arm, targeted the trio in a building in a crowded Rafah neighborhood on one of the heaviest days of fighting thus far. Thus this was a very different strike from the one at the start of the Operation Pillar of Defense in November 2012 when the Hamas military commander, Ahmed Jabari, was assassinated in a surprise attack that marked the beginning of that operation. Given that the fighting had re-escalated since Tuesday, and that Israel was known to be trying to hit the Hamas military leadership, the three had taken every possible precaution to evade Israeli intelligence. Those precautions simply were not good enough. 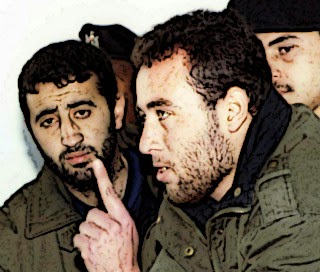 It can be assumed that whether or not Muhammad Deif is still alive, those members of the Hamas military leadership who have survived are now desperately trying to figure out what went wrong. How could it be that after long weeks in which Israel was unable to get to any of the heads of the military wing, now, within 48 hours, the Shin Bet located one of Deif’s hideouts and killed three other members of the Hamas general staff?

It should be stressed again: Two of the three were not mere senior commanders of the Izz ad-Din al-Qassam Brigades. Muhammad Abu Shamala, the “head of the southern command” and Raed al-Attar, the commander of the Rafah area, were part of the founding generation of the Hamas military wing — along with Deif and several others who are no longer with us, including Mahmoud Al-Mabhouh and Emad Akel. They were among Deif’s closest brothers-in-arms — long-term veterans with experience and knowledge that cannot be easily replaced.

Abu Shamala and al-Attar are tied to almost every major attack in and from the Rafah area since 2001. These include the kidnapping of Gilad Shalit on a tunnel raid into Israel in which two other soldiers were killed, and even the killing of 16 Egyptian soldiers on the Gaza-Sinai-Israel border two years ago. Thus the two had tangled not only with Israel, but also with Egypt, which knew of their ties to terrorist organizations in the Sinai.

According to Hell sources, the 19 eternally damned terrorists have struggled to understand why they have been subjected to soul-withering, infernal torture ever since their Sept. 11 arrival.
"There was a tumultuous conflagration of burning steel and fuel at our gates, and from it stepped forth these hijackers, the blessed name of the Lord already turning to molten brass on their accursed lips," said Iblis The Thrice-Damned, the cacodemon charged with conscripting new arrivals into the ranks of the forgotten. "Indeed, I do not know what they were expecting, but they certainly didn't seem prepared to be skewered from eye socket to bunghole and then placed on a spit so that their flesh could be roasted by the searing gale of flatus which issues forth from the haunches of Asmoday."

Doug, you give those 3 globs of humanoid detritus too much honor by calling them "generals". "Commanders", maybe. Oh, and a blogger reported a possible slip of the tongue from another terrorist lead roach in Gaza that may confirm that the heinous genocidal maniac, Mohammed Deif, was turned into a pile of smoldering ash.