SORRY, PROGRESSIVES: Not All Viewpoints are Equally Valid

By Oleg Atbashian. First published in The American Thinker

There is a reason why the question below, from a Hong Kong elementary school test, is making the rounds on the internet. Most adults can't solve it – not for want of math skills, but because most of them have lost the child's ability of unconventional thinking. Instead, they have acquired the debilitating unwillingness to try a different perspective. 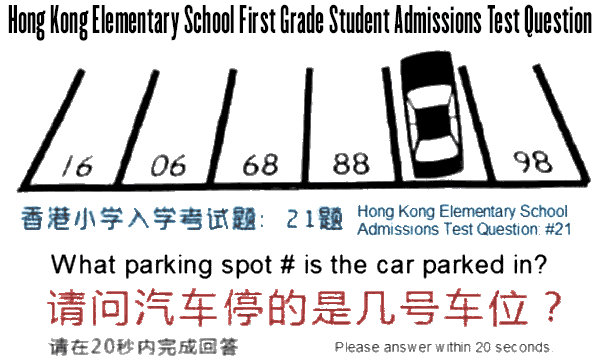 The answer to the problem is provided at the bottom, but before you give up, here are some clues.

This problem is not mathematical, but rather philosophical. It proves that, in spite of what the modern "progressive" philosophers tell us, not all viewpoints are equally valid; in most cases, there is only one point of view that leads to the right answer.

This may cause objections from proponents of moral relativity, who believe that everyone's viewpoint is correct in its own way. Moral relativity is merely a nice-sounding cover for intellectual laziness; it relieves one of guilt for not trying to find the right solution. It's a lot easier to presume that one's viewpoint is always correct: wherever one happens to be at any given moment, that must be the correct position. By this logic, any position one had yesterday or will have tomorrow must also be correct. Therefore, all such positions must be equally valid, and anyone else's conflicting positions at different points of time must be equally valid, too. This is a way to madness.

Anyone can misjudge the facts due to the wrong vantage point. But while some will admit their mistake and will try to look at things differently, a moral relativist will insist that his perspective doesn't need changing and will blame the lack of solutions on the unknowable nature of the universe. He will then devise far-fetched schemes and erroneous complex formulas explaining why things are the way they are. It may be entertaining, but it will not lead to the right answer.

This test problem is, in fact, an optical illusion; it misleads us into judging the reality from the wrong perspective. In this sense, it is akin to agenda-driven movies, political speeches, media editorials, college courses, and writings by "progressive" economists, who, knowingly or not, blind us to simple facts, causing us to make wrong choices that benefit their cause to our detriment.

Oftentimes deceit can be accomplished not by hiding facts, but by replacing the coordinates and switching the entire frame of reference, which leads us to misjudge the same facts because we look at them from the wrong angle. This particular children's problem is a good reminder that out of many ways to look at facts, only one is correct, and all others will only take us on a maddening and fruitless quest for nonexistent solutions.

It also calls to mind the ongoing political and cultural disputes between "liberals" and "conservatives." Even though the "liberals" have never offered a workable answer, they rest assured in the superiority of their complex and morally relative approach to facts, despising "conservatives" for their simple belief in absolute truths that work. Unwilling to look at things from their opponents' "simple" perspective, they like to end their discussions with "let's agree to disagree."

Likewise, quite a few foreigners look at America from across the border or across the ocean and misjudge this country's realities simply because of the wrong perspective. Convinced of the superiority of their vantage point, they predictably arrive at bizarre and far-fetched conclusions, each one stranger than the last.

In summary, when faced with a seemingly unsolvable problem, check your absolutes; you may well be on the wrong side. Verify your system of coordinates, and make sure you are looking at the facts from the right perspective.

Wouldn't we all be better off if our political candidates were tested with this question before running for office – starting with our president? As it happens, the current president's far-reaching and flexible approaches to the country's problems seem to include every possible angle except that of the people in the parking lot.

If you're still unsure about the answer, see below. 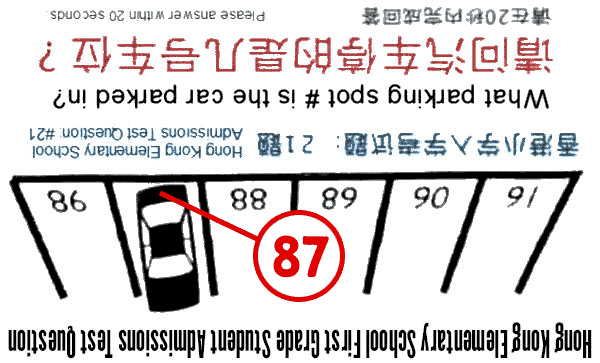 I don't mind not understanding. So long as the answer is within logic. A trick, to be sure, but a true one, based on reality, so all good in my book.

As to the open minded? It is far easier to celebrate the incorrect, for there are few who are right. And, isn't it all about painless celebration? I'm surprised they haven't advocated eightballs for lunch. Could be organic, low cal, low fat, and probably, if farmed correctly, could be supplied until death... with a little help through varied potency.

I must be sick--my first thought was "Of course the numbers are going to be "right-side-up" for the drivers--what do they see?

And the answer was the only one possible, in a real world.

In the "real" world of Obama land the test doesn't exist and if you insist it does your a racist and a domestic terrorist.

What the answer to this question implies as Sarah Palin said, "in a time of universal deceit, truth is a revolutionary idea"

The answer is the owner of the car is a racist capitalist oppressor because all the other spaces are empty signifying that they all took egalitarian public transportation.