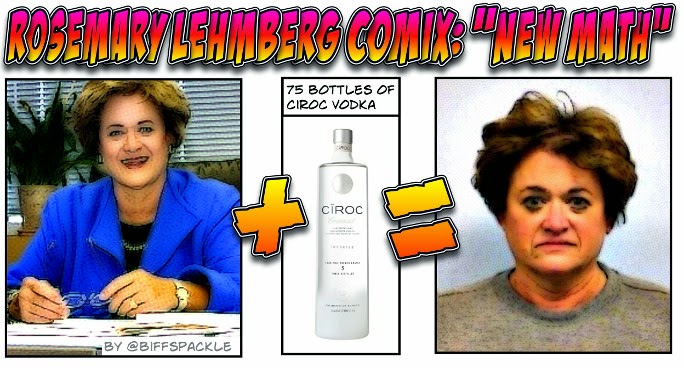 Contributor Beth over at Change.org describes just how out of control this drunken maniac really was.

Resident Mark Weston called deputies at about 10:45 p.m. after seeing a 2001 Lexus swerving in and out of a bike lane for about one mile on the southbound side of FM 620 near RM 2222... As Lehmberg’s driving became more erratic, Weston grew concerned and called 911.

He told deputies he observed the Lexus drive into oncoming traffic while approaching Comanche Trail. The Lexus then pulled to the side of the road in front of St. Luke’s Church near the 5600 block of FM 620.

Deputies arrived and discovered the suspect—Lehmberg—in possession of an open container of vodka in the passenger seat...

...Lehmberg was transported to the Traivs County Jail for booking. At the booking station, Lehmberg was highly combative, attempting to kick and spit at officers, screaming curse words as well as yelling “Call Greg!”, likely a reference to Sheriff Greg Hamilton. She was placed in an isolation room but continued to be physically belligerent. She was removed from the isolation room and strapped to a restraint chair. A spit restraint was fastened to Lehmberg’s face. She was then placed back in the isolation room. She was so belligerent that the magistrate judge refused to magistrate her until she calmed down...

...Lehmberg's blood alcohol content was reportedly 0.23 -- nearly three times the legal limit of 0.08, which automatically upgrades the charge from a Class B misdemeanor, to a Class A misdemeanor (since the BAC was over .15)...

Lehmberg, of course, did not step down and instead may have inspired a politically motivated attack against Gov. Rick Perry for demanding that she step down from her post.

She is a ruling class elite. The law doesn't apply to her and her pals. Everyone should know that.
She should have another bottle of vodka and give it a good think. How about it there sweety. Those laws? If the law don't apply to you, there is no law. If there is no law, what will protect you from us? Cause it sure don't protect us from you.

This woman should be doing time at a Betty Ford rehab, not bringing frivolous lawsuits against a damn fine governor.