LINCOLN, Nebraska – Democratic Senate nominee Dave Domina bills himself as a champion of the little guy, but his financial disclosure shows he is fabulously wealthy. 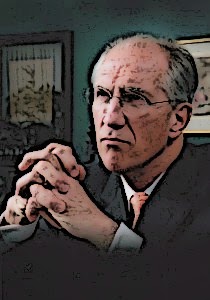 Domina is one of the most prominent trial lawyers in the state and worth between $20 million and $82 million, according to the financial disclosure forms he submitted to the secretary of the U.S. Senate.

His net worth could be much higher, since he valued two farms owned by his spouse or dependent at “over $1 million,” and candidates aren’t required to report the value of their personal residences. It’s difficult to pinpoint his precise net worth, since candidates report their assets, salary and liabilities in broad ranges, such as $250,000 to $500,000. Or “over $50 million.”

But clearly, Domina is a wealthy man. He would rank 19th on Roll Call’s list of the 50 richest members of Congress.

His wealth easily overshadows his Republican opponent: The Republican nominee, Ben Sasse, reported assets of between $873,000 and $2.4 million. Sasse was president of Midland University in Fremont before resigning to focus on his campaign.

Domina has built a reputation by representing people who take on large, multi-national corporations, insurance companies and banks. In one of his high-profile cases, he won a $1.3 billion jury verdict for cattlemen against the nation’s largest slaughterhouse, which was accused of manipulating prices, although the verdict was overturned on appeal.

He criticizes the notion that corporations are people, and he has lamented the fact that the billionaire class keeps growing while the middle class shrinks. He may not be a billionaire, but he’s certainly a multi-millionaire.

And while he’s also well-known as the attorney representing Bold Nebraska landowners in their fight against the proposed Keystone XL oil pipeline, he owns $250,000 to $500,000 in stock in Southern Co., an energy company that operates three nuclear power plants and is one of the largest producers of electricity in the nation— 73 “fossil and hydro plants,” according to its website.

Domina has railed against big banks holding most of the nation’s money but does business with some of those very banks. His disclosure shows he has a 401(k), and three mutual funds at Wells Fargo, although he also has assets at smaller banks, such as Farmers State Bank in Carroll, Neb.

In announcing his candidacy, Domina said five banks shouldn’t hold 65 percent of all the money in this nation, and should be broken up.

“We must take back our markets and restore real competition, not pay unfair taxes while big money escapes through thousands of tax loopholes in the nation’s revenue bucket,” he said in January.

Domina said he decided to run for office because there’s a limit to what a lawyer can do to address problems.

He did not respond to a request for an interview regarding his finances.