SOMEONE PINCH ME: I can support Democrat Hank Johnson 100 percent on his latest bill

Under President Obama -- who famously claimed (twice) that America needed a "civilian national security force just as powerful as the military" -- law enforcement agencies around the country have become the paramilitary wings of local governments.

Nowhere has this fact become more obvious than in Ferguson, Missouri in the aftermath of the shooting of a young black man. 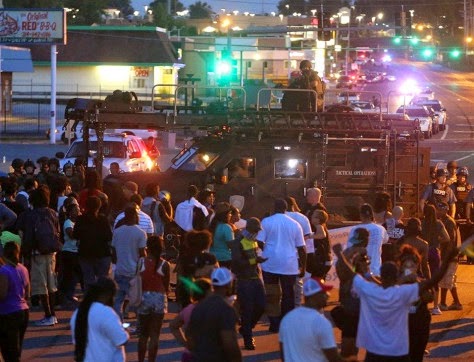 Now, Democrat Hank Johnson is calling for a demilitarization of law enforcement.

A Democratic congressman plans to introduce a bill to restrict a Defense Department program that provides machine guns and other surplus military equipment for free to local law enforcement agencies across the country.

Democratic Rep. Hank Johnson said Thursday that the death of an unarmed teenager who was shot by a police officer in a St. Louis suburb highlights the need for the legislation, which has been in the works for months. The bill comes as members of Congress have called for the Justice Department to investigate the shooting of a black teen by a police officer in Ferguson, Missouri.

Police in riot gear and military garb have clashed nightly with protesters since Aug. 9 shooting of Michael Brown and at times have trained weapons on them from armored trucks.

A spokesman for the Defense Logistics Agency, the government's combat logistics support agency, said the Ferguson Police Department has been part of the surplus equipment program. It received two tactical vehicles — both Humvees — as well as a generator and a trailer and may have received other equipment, DLA spokesman Joe Yoswa said.

Johnson said city streets should be a place for businesses and families, "not tanks and M16s." He said a Pentagon program that transfers surplus military equipment to state and local law enforcement has led to police agencies resembling paramilitary forces.

Dear President Obama: American citizens are not ISIS. Save the impressive displays of force for the Islamonazis, okay?

Hmmm. I'd have to read the bill; it sounds good, but Democrat Hank Johnson is the same guy who worried about Guam capsizing if all the people went to one side of the island.

Of course he didn't write the bill, his staffers did... but I have no reason to trust them to write something that would actually be good for the USA.

As a former democrat, I don't care what a democrat politician says, they're lying for a vote. And if by the slightest unlikelihood they're not, the "democrat machine" won't let'm follow through when it counts.

Hank Johnson is lying communist pos, and supporting anything he says is suicide. Go jump off the bridge by yourself.

Yes we need to demiliterize police Departments and I include Federal agencies in that but not for the reason liberals are now crying boo hoo about it.

Peaceful demonstrations should not be threatened by militia style police actions however looting should be put down by whatever means are available.

I think we can safely say if this had been a mostly white demonstration de-militerizing the police would not have come up. The all out Federal militia type actions against the Bundy ranch prove that. Where was a bill to de-militerize Federal agents from the Federal Land Management Agency and why are they an militarily armed agency in the first place?
http://www.libertylawsite.org/2013/10/27/the-war-on-us/

"Peaceful demonstrations should not be threatened by militia style police actions however looting should be put down by whatever means are available."

You can't have both, looting or stealing is a law enforcement issue and a case for courts. there is no justification for murder by police.

We have, on the other hand, an FBI who was re-tasked to look for terrorists, and ignores white collar crime.

Because of this we had a financial melt down cause by bankers who thought they were in vegas, and many people were robbed of their homes through banker created, fraudulent documents and rocket docket courts. (exactly what kangaroo courts were)

To top it off, Banks put the MERS system in place to avoid paying local real estate taxes.

No one is calling for death to these embezzlers or their accomplices in the DoJ.