PLEASE, PRESIDENT JARRETT: Obliterate the barbarians who would "raise the flag of Allah in the White House"

War On Terror: Having ignored Iraqi pleas for air strikes in ISIL's infancy, when the terrorists could have been decimated, the administration ignores the Kurdish peshmerga plea for the same American weapons that ISIL has. 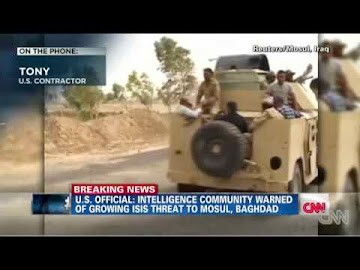 Watching the modest airstrikes on ISIL forces, we are reminded of Secretary of State John Kerry's promise that any military action in Syria would be "unbelievably small." As it turned out, it was also nonexistent, and the carnage continues in the country where ISIL formed and trained under our watchful and indifferent eyes.

The targeted airstrikes ordered by President Obama last week near the Kurdish city of Erbil in northern Iraq, where we have a consulate, as ISIL forces lay siege to thousands of hungry Yazidi and Christian refugees in the mountains of northern Iraq, are welcome.

But they fall far short of what can be or could have been done if we really wanted to stop ISIL, considered by many a greater long-term threat than al-Qaida.

"The situation near Erbil was becoming more dire than anyone expected. We didn't want another Benghazi," an administration official told the New York Times. The reference was to the deaths of four Americans in the 2012 terrorist attack on our mission in Libya, where another gathering terrorist storm was ignored and a rescue or relief attempt was never made in time.

On Sunday, Sen. Lindsey Graham warned that ISIL threatens not just Iraqis, but also Americans here. Obama's strikes are insufficient to turn back ISIL and are meant just "to avoid a bad news story on his watch."

Graham envisions "an American city in flames" someday if the ISIL caliphate established in parts of Syria and northern Iraq becomes a new haven for global terrorism. Certainly there's already a price being paid for our past indifference to the growing ISIL threat.

According to a June 11 piece in the New York Times, Iraqi Prime Minister Nuri Kamal al-Maliki on May 11 met with American diplomats and Gen. Lloyd Austin, head of Central Command, asking the U.S. for the ability to strike ISIL using drones. If that wasn't doable, Maliki said he would approve U.S. drone or airstrikes.

That request fell on deaf ears, and we passed up chances then and earlier to hit ISIL in its relative infancy as it trained and armed in the open desert.

Also falling on deaf ears were early pleas by Kurdish forces, known as Peshmerga and meaning "those who confront death," for modern weapons to fight ISIL. Armed largely with outdated Russian weapons from the Saddam Hussein era, they were being outgunned by ISIL using captured American weaponry.

"Let Washington know how serious the situation is and how big of a need we have for military support," Masrour Barzani, the Kurds' intelligence and security chief, has said. "We are left out to fight all these terrorists, all these problems on our own."

Why President Obama isn't pressuring the Maliki government to release $200 million worth of American weapons supposedly earmarked for the Kurds but were never delivered to them under the Pentagon's foreign military sales program is unclear.

Belatedly, the administration has begun providing weapons to Kurdish forces, who have started making gains against Islamic militants in northern Iraq. The source, type and amount of the weapons are unclear.

What is clear is that ISIL must be defeated, not merely contained, and that our willing allies in this campaign must be armed to the teeth and supported by an air campaign designed to get the job done.

Instead of "unbelievably small," this campaign must be unbelievably big, lest the threat by ISIL spokesman Abu Mosa to one day "raise the flag of Allah in the White House" puts us squarely in their cross hairs.

She'll just stand by while vice-president Obama raises it.

The Iranian Communist President Valerie Jarrett? Yeah, like she's opposed to anything ISIS is doing.

C'mon people.. please. Get a scorecard if you are easily confused. If you have been reading zerohedge (for comprehension), you would know that the move to oust Assad is a play to get gas from Qatar to Europe, excising Putin. Here is IBD showing their ignorance:

Watching the modest airstrikes on ISIL forces, we are reminded of Secretary of State John Kerry's promise that any military action in Syria would be "unbelievably small." As it turned out, it was also nonexistent, and the carnage continues in the country where ISIL formed and trained under our watchful and indifferent eyes."

YES - ISIL FORMED UNDER OUR WATCHFUL EYES. Not "indifferent", oh no, there is a reason that ISIS is using M16s on up. The "unbelievably small" airstrikes were to be in support of ISIL. Putin was the one who cut off that action, protecting his gas hegemony, one of the higher trump cards in his hand.

PS - quoting McCain's colostomy bag, General Lindsay Graham, is never a wise move. The reason Linny was able to forsee ISIS' next moves was because he wargamed it in his cat's litter box. The "attack on America" was better than Viagra.