CNN -- yep, it's still in business -- says that Obama's multiple policy failures on every front are not his fault.

As we head closer to the November elections it’s clear that Obama’s continued massive foreign policy implosion is already having a deleterious effect on Democrat’s hopes, and unless there’s a sudden blossoming of Middle East peace, it will probably increase going forward... 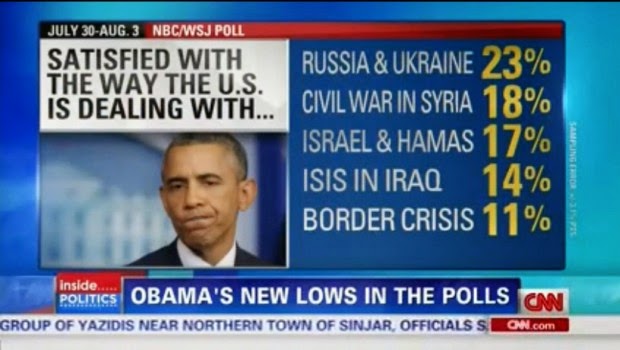 This morning on CNN's Inside Politics, Politico's Manu Raju said that the president seems "powerless" to deal with the chaos in the world, which is "putting the Senate at risk" for the Democrats.

Gee, who could have predicted that a back-bencher state senator -- weaned on the philosophies of Marx and Alinsky and with literally zero executive experience -- would be an utter and complete disaster?

But no dinner is going to save Ebola Boy's thin skin anymore. It's just a matter of how many dinners these idiots can have and how much we can do in return to limit Ebola Boy's intentional damage to our nation.

Now that, at least, is good for a very large laugh. Maybe it was different Hillary 'Reset Button
Clinton who went on a drunk bender around the world for 4 years as Secretary of Inebriation under Ebola Boy.