Gee, this seems rather a bizarre conflict of interest.

But I'm sure Mitch McConnell's completely unaware of his wife's activities and will work tirelessly to combat her environmental Marxist organization. And because Mitch is so brave, eloquent and charismatic, we can be sure he'll do everything he's promised to do if reelected to, what, his 408th term in Washington?

For months, Republican Sen. Mitch McConnell has accused his Democratic opponent, Alison Lundergan Grimes, of engaging in a “war on coal,” casting her as an outright enemy of one of the state’s most vital industries. 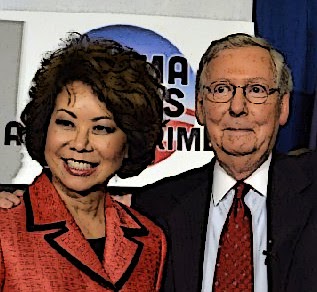 But while McConnell presents himself as a defender of Kentucky coal mining, a member of his own family who serves as a key campaign surrogate is taking a role in an organization that funds one of the most aggressive anti-coal campaigns in the country.

McConnell’s wife, former Secretary of Labor Elaine Chao, sits on the board of directors of Bloomberg Philanthropies, which has plunged $50 million into the Sierra Club’s Beyond Coal initiative, an advocacy effort with the expressed goal of killing the coal industry.

In 2011, Bloomberg Philanthropies teamed up with the Sierra Club to target coal plants for closure in an effort to "end our nation’s reliance on dirty coal, plant-by-plant, community-by-community, and state-by-state," according to Bloomberg Philanthropies’ website. The Bloomberg Philanthropies-funded campaign has a stated goal of “retir[ing] a third of the nation’s 500 coal plants by 2020, replacing the majority of retired coal plants, and keep[ing] coal in the ground in Appalachia.” The organization boasts that it has “prevented 150 coal plants from being built” and has taken direct action against 16 plants in McConnell’s home state of Kentucky, arguing that coal production is a health hazard and is harmful to the environment. The website takes credit for retiring 172 “dirty power plants” with “351 to go.”

When former New York City mayor Michael Bloomberg announced support for the initiative three years ago, he called coal “a self-inflicted public health risk” and declared that ending all coal power production was “the right thing to do.”

"Ending coal power production is the right thing to do, because while it may seem to be an inexpensive energy source the impact on our environment and the impact on public health is significant,” Bloomberg said at the time. “Coal is a self-inflicted public health risk, polluting the air we breathe, adding mercury to the water we drink, and the leading cause of climate disruption.”

The Sierra Club’s anti-coal website even features a map of coal plants in Kentucky and throughout the country and labels each with a skull and crossbones. 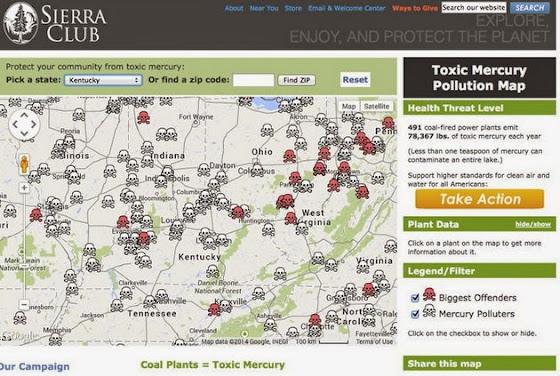 With help from Bloomberg’s group, the Sierra Club has doubled its staffing capacity and expanded the anti-coal campaign to 45 states.

...Chao’s role in Bloomberg Philanthropies flies in the face of the primary message of the McConnell campaign, which has made defending the coal industry the centerpiece of his re-election effort.

McConnell has run multiple ads proclaiming his support for coal.

"I will be the leader of the forces that take on the war on coal," McConnell said in a recent ad that painted Grimes as an opponent of the coal industry. "We've got to fight back in this war on coal. Damn right. We're not going to sit there and take it, I can assure you that.”

...Bloomberg Philanthropies isn’t the only group Chao represents that has taken a stand against the coal industry. She also sits on the board of directors at Wells Fargo, which in 2013 announced that it would divest from surface mining of coal in Appalachia due to environmental concerns. In the bank’s Environmental and Social Risk Management report [PDF], the company announced that it would no longer lend to coal companies that participate in “Mountain Top Removal” (MTR), in which miners extract coal from mountain summits...

...The McConnell family has benefited significantly from Chao’s work with Wells Fargo. As a member of the board of directors, Chao received $332,350 in 2011 through compensation, stock and fees, according to a Wells Fargo stockholder report from March 2012.

I would never advocate voting for a Democrat -- I'm not suicidal -- but unless Mitch McConnell publicly apologizes for his race-baiting debacle in Mississippi, I sincerely believe Kentucky's conservative base will sit out the election. Just my opinion, I'm not in the prognostication business. But I fear that will happen and, if it does, McConnell's cowardice, greed and idiocy will be to blame.

Coal can be coverted to Crude. It powered the 3rd Reich in Germany. The big truth is they are susidizing fracking while shutting down coal. At this point the economics favor just susidize both and export export export.

Bloomberg philanthropies spent 50 million to destroy the cheapest form of electrical generation? How many others pitched in? No wonder our country is screwed, with "philanthropies dedicated to higher costs, tax exempt so that rich enviros can better sh** on poor people