Well, this rather far-fetched notion would appear to be a game-changer.

China reportedly wants to enter the world of supersonic transport – under the water.

Rather than working up its own successor-to-Concorde project, the South China Morning Post says scientists at Harbin Institute of Technology's Complex Flow and Heat Transfer Lab are working on developing a technique called supercavitation, first pursued by the Soviet military during the Cold War.

...Supercavitation refers to giving the vessel a bubble to travel in, reducing the drag of water. In the SCMP diagram, the vessel is shown ejecting gas at its nose to maintain the bubble. This demands a high-speed launch to generate the air bubble in the first place, unless there's some way to let a vessel start slow but accelerate to supercavitating speeds. 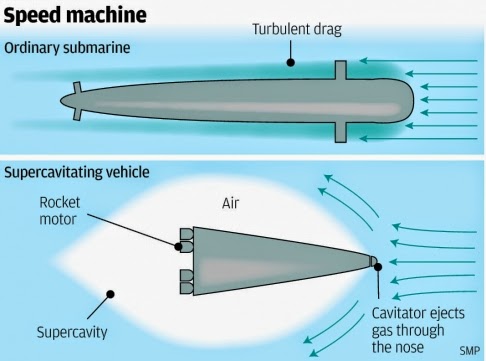 That's the bit the Chinese boffins reckon they've dealt with: their vessel covers itself with a liquid membrane at launch to deal with water drag at low speed. The membrane will wear away, but that doesn't matter so long as the sub can get to a high enough speed to generate its own air bubble.

The group also says its approach provides a way to steer the vessel: the liquid membrane can manage drag on one side or the other to change directions. “By combining liquid-membrane technology with supercavitation, we can significantly reduce the launch challenges and make cruising control easier,” says Harbin professor Li Fengchen in the story.

If a vessel could exceed the speed of sound underwater – around 5,800 km/h, which is no mean feat to start with – it would travel from Shanghai to San Francisco in around 100 minutes.

I'm no physicist, but displacing that amount of water for that length of time would seem to be a tad beyond man's reach at the moment.

I'm sure the whales, dolphins, and sharks will have plenty of time to get out of the way.

Ah, this is yet another version of the soliton technology which will eventually be used by my first prototype flying saucer, which will either get close to C speeds or even exceed C. What happens when we do is anyone's guess. China is the new America, which once was the new Germany. Dominance in innovation and development will be theirs for the time being, we must pay attention and keep up if we can.

Considering we cant build rocket motors that can burn for longer than 10 minutes or so (not even the Saturn 5s) then the possibility of this being real is slim and none....