NYT: Fear of "Another Benghazi" Political Debacle, Not Genocide, Drove Obama to Call For ISIS Airstrikes

The New York Times reports that it was not genocide in Iraq, it was not a humanitarian catastrophe, it was not to protect human lives that forced Obama's hand in ordering airstrikes against ISIS; it was all about politics. 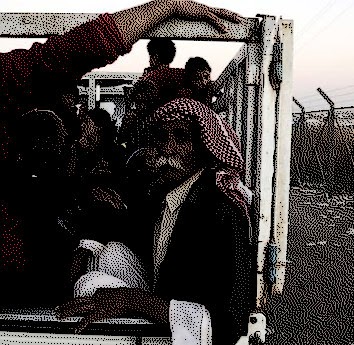 On Wednesday evening, moments after finishing a summit meeting with African leaders at the State Department, the chairman of the Joint Chiefs of Staff delivered a stark message to President Obama as they rode back to the White House in Mr. Obama’s limousine.

The Kurdish capital, Erbil, once an island of pro-American tranquillity, was in the path of rampaging Sunni militants, the chairman, Gen. Martin E. Dempsey, told the president. And to the west, the militants had trapped thousands of members of Iraqi minority groups on a barren mountaintop, with dwindling supplies, raising concerns about a potential genocide.

With American diplomats and business people in Erbil suddenly at risk, at the American Consulate and elsewhere, Mr. Obama began a series of intensive deliberations that resulted, only a day later, in his authorizing airstrikes on the militants, as well as humanitarian airdrops of food and water to the besieged Iraqis.

Looming over that discussion, and the decision to return the United States to a war Mr. Obama had built his political career disparaging, was the specter of an earlier tragedy: the September 2012 attack on the diplomatic mission in Benghazi, Libya, which killed four Americans, including Ambassador J. Christopher Stevens, and has become a potent symbol of weakness for critics of the president...

...As the tension mounted in Washington, a parallel drama was playing out in Erbil. Kurdish forces who had been fighting the militants in three nearby Christian villages abruptly fell back toward the gates of the city, fanning fears that the city might soon fall. By Thursday morning, people were thronging the airport, desperate for flights out of town.

“The situation near Erbil was becoming more dire than anyone expected,” said a senior administration official, speaking on the condition of anonymity to describe the White House’s internal deliberations. “We didn’t want another Benghazi.”


I'd encourage you read the entire article to get a sense of how feckless, incompetent and ideologically twisted this administration is.

As usual, it would appear that Michelle and co-President Valerie Jarrett helped make the decision to act.

Laced throughout the story is the party line among Democrats, which is the following sandwich of sheer, unvarnished idiocy:

Democrats on the Sunday talk shows insisted that there was no American military solution to the violence in Iraq, which the president also emphasized in a news conference on Saturday.

“In order to put the situation right, we have to begin at the fundamental core, which is leadership in Baghdad, Iraqi leadership, which will work together in a unified way to defend and protect their country and defeat ISIS,” Senator Jack Reed, Democrat of Rhode Island, said on the CBS News program “Face the Nation.” “Ultimately, this has to be a political strategy that takes place in Baghdad, not in Washington.” Hordes of bloodthirsty, 7th-century throwback barbarians are laying waste to cities and slaughtering thousands of innocents; perhaps these brilliant Democrat strategists can tell us how you negotiate with Islamonazis like ISIS.

Meanwhile, our longtime allies the Kurds have been begging for ammunition. In an unprecedented act of partnership, Iraq's government delivered a planeload of small-arms ammo a few days ago.

It is apparent, however, that the Obama administration itself has been reluctant to resupply the Kurds, which could help suppress the threat of ISIS.

In short, the Obama administration's foreign policy is just as disastrous and destructive as its domestic counterpart; only the foreign policy failures are certain to get Americans killed needlessly.

He's amazing in an absolutely horrifying way. Like watching a train wreck in slow motion.

The "problem", as Obama sees it, is he's getting bad press and his poll numbers are dropping.

The "solution" is a few air raids that will accomplish precisely nothing as far as stopping ISIS is concerned but will allow him to pose as if he's doing "something".