Every Day That This Regime is in Power, the Importance of the Second Amendment Becomes Ever More Clear

A QuickTrip was burnt to the ground last night after it was looted in Ferguson... Several businesses were vandalized and looted during the rioting. 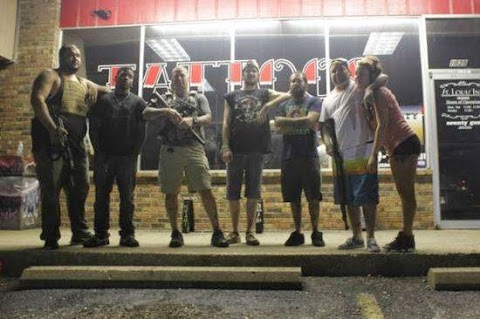 Mike Gutierrez (left) and Adam Weinstein (third from left) brought guns to guard their store during the riots in Ferguson last night.

Remember when the idiot Daniel Schorr, the putz from National Government Radio, wrote the following?

The post-racial era, as embodied by Obama, is the era where civil rights veterans of the past century are consigned to history and Americans begin to make race-free judgments on who should lead them.

Post-racial began to come into vogue after Obama won the Iowa caucuses and faired well in the New Hampshire primary.

The Economist called it a post-racial triumph and wrote that Obama seemed to embody the hope that America could transcends its divisions.

What a dunce. What a clown. What a complete nincompoop. It's a freaking travesty that a single penny of our hard-earned tax dollars goes to support such a schmuck.

Daniel Schorr has been dead since 2010.

That doesn't make his comments any less idiotic.