THIS IS YOUR RECOVERY. And This is Your Recovery On Drugs.

“If the American people ever allow private banks to control the issue of their currency, first by inflation, then by deflation, the banks…will deprive the people of all property until their children wake-up homeless on the continent their fathers conquered…. The issuing power should be taken from the banks and restored to the people, to whom it properly belongs.” – Thomas Jefferson

Does this chart portray an economic recovery in any way? Wages have been stagnant since the START of the supposed recovery in 2010. Real median household income, even using the highly understated CPI, is on a glide path to oblivion. You just need to observe with your own two eyes the number of Space Available signs in front of office buildings, strip centers and malls across America to realize we have further to fall. Low paying, part-time burger flipping jobs aren’t going to revive this debt saturated economic system. But at least the .1% are enjoying their Federal Reserve created high. Fiat is a powerful drug when administered in large doses to addicts on Wall Street. 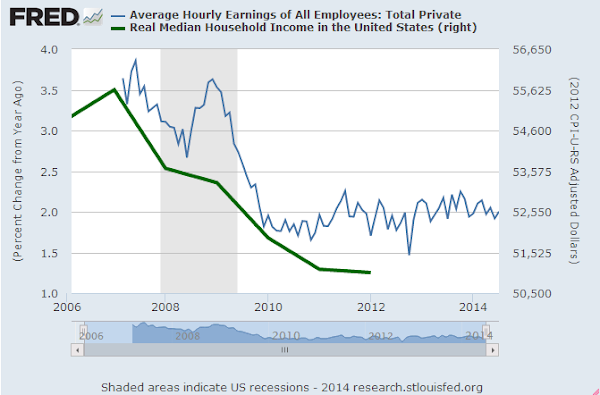 The S&P 500 has risen from 666 in March of 2009 to 1,972 today. That is a 196% increase in a little over five years. During this same time, real household income has fallen by 7%. There have been a few million jobs added, while 11 million people have left the labor market. According to Robert Shiller’s CAPE ratio, the stock market valuation has only been higher, three times in history – 1929, 1999, and 2007. He seems flabbergasted by why valuations are so high. Sometimes really smart people can act really dumb.

The Federal Reserve balance sheet was $900 billion before the 2008 financial crisis. Today it stands at $4.4 trillion. The Fed has increased their balance sheet by 220% since the March 2009 market lows. Do you think there is any correlation between the Fed puppets printing $2.4 trillion and handing it to their Wall Street puppeteers, who used their high frequency trading supercomputers and ability to rig the markets so they never lose, and the third stock bubble in the last 13 years? It’s so self evident that only an Ivy League economist or CNBC anchor wouldn’t be able to see it. 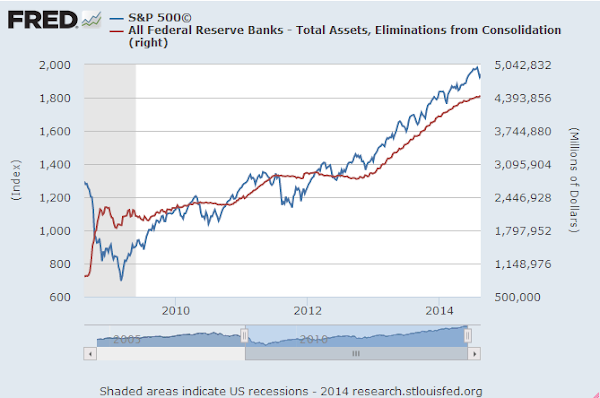 Let’s look at the amazing stock market recovery without Federal Reserve heroine pumped into the veins of Wall Street banker addicts. If you divide the S&P 500 Index by the size of the Federal reserve balance sheet, you see the true purpose of QE1, QE2, and QE3. It wasn’t to save Main Street. It was to save Wall Street. Without the Federal Reserve funneling fiat to the .1% banking cabal and creating inflation in energy, food, and other basic necessities for the 99.9%, there is no stock market recovery. The recovery has occurred in Manhattan and the Hamptons. It’s been non-existent for the vast majority of people in this country. The wealth effect and trickle down theory have been disproved in spades. The only thing trickling down on the former middle class from the Fed is warm and yellow. 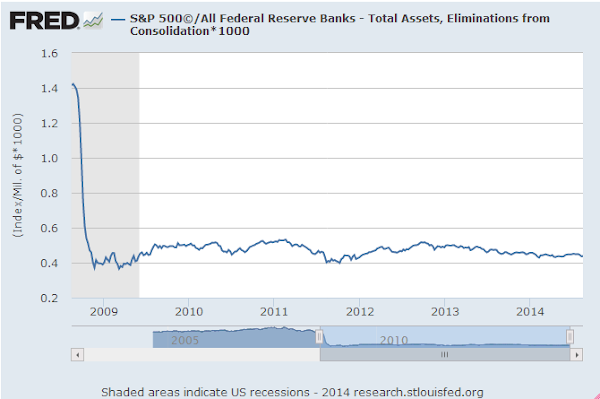 The entire stock market advance has been created on record low trading volumes and record high levels of monetary manipulation. Even though the Federal Reserve has driven senior citizens further into poverty with 0% interest rates, those with common sense have refused to be lured back into the lion’s den. They have parked record levels of fiat in no interest bank and money market accounts. They are tired of being muppets led to slaughter.

Quantitative easing was supposed to force little old ladies into the stock market and consumers to spend their debased dollars before they lost more value. The spending would revive the dormant economy just as the Keynesian text books promised. It didn’t happen. The peasants haven’t cooperated. Quantitative easing and ZIRP sapped the life from the middle class as their wages have stagnated and their living expenses have skyrocketed. Mission Accomplished by the Fed. Of course, the CNBC bimbos and shills would declare this $10.8 trillion to be money on the sidelines ready to boost the stock market ever higher. I love that storyline. It never grows old. 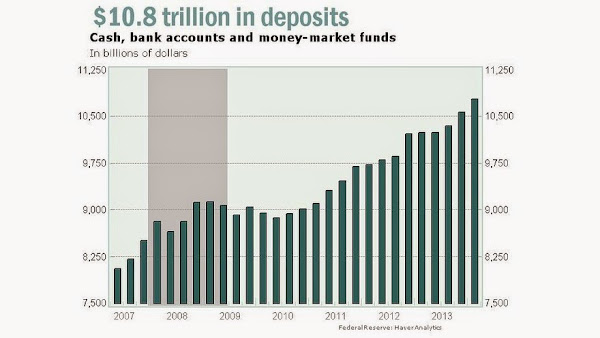 The MSM, government and Wall Street continue to flog the story about a housing recovery. It’s been nothing but a confidence game based upon the Fed’s easy money and the Wall Street scheme to buy up foreclosed properties with the Fed’s money. The scheme was to artificially boost home prices by restricting home supply through foreclosure manipulation, in order to allow the insolvent Wall Street banks to get out from under their billions in toxic mortgage loans.

Shockingly, the Case Shiller home price index has soared by 25% since 2012 despite first time home buyers being virtually non-existent and mortgage applications plunging to 14 year lows. How could that be? Don’t people need mortgages to buy houses? Isn’t real demand necessary to drive prices higher? Not when Uncle Ben and Madam Yellen are in charge of the printing press. Housing bubble 2.0 has arrived. I wonder if the Federal Reserve balance sheet increase of 50% since 2012 has anything to do with the new housing bubble. 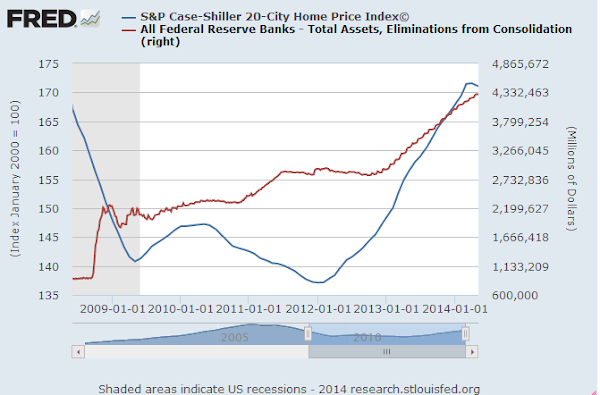 It seems a similar result is obtained when dividing the Case Shiller Index by the size of the Fed’s balance sheet. The real housing market for real people is worse than it was in 2009. The national home price increase has been centered in the usual speculative markets, aided and abetted by the Fed’s easy money, managed by the Wall Street hedge funds, and exacerbated by the late arriving flippers who will be left holding the bag again. The Fed/ Wall Street scheme has priced young people out of the market and has failed to ignite the desired Keynesian impact. Investors/flippers account for 34% of all home sales. Foreigners with no knowledge of value metrics account for 30% of all home sales. The lesson of history is that most people don’t learn the lessons of history. The 2nd housing bubble in seven years is seeking a pin. 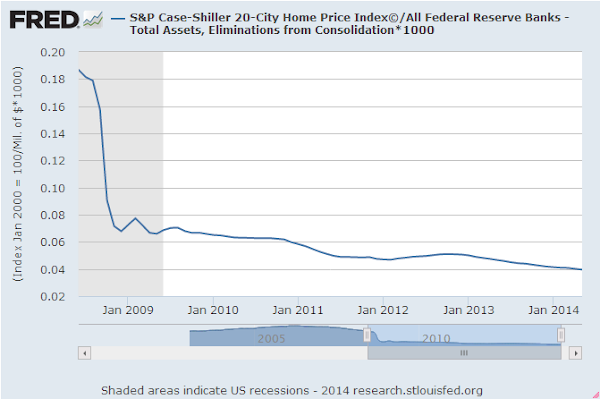 If ever you needed proof of the confidence game in its full glory, the chart below from Zero Hedge says it all. Mortgage rates have been falling for the past year, home builders have been reporting soaring confidence about the future, and the National Association of Realtors keeps predicting a surge in home buying any minute now. One small problem. Mortgage applications are in free fall, new home sales are at 1991 levels, and existing home sales are falling. Home prices have peaked and are beginning to roll over. The Wall Street hedgies are all looking to exit stage left. Young people are saddled with over a trillion of government issued student loan debt and millions of older subprime borrowers have been lured into more auto loan debt. Home sales will be stagnant for the next decade. 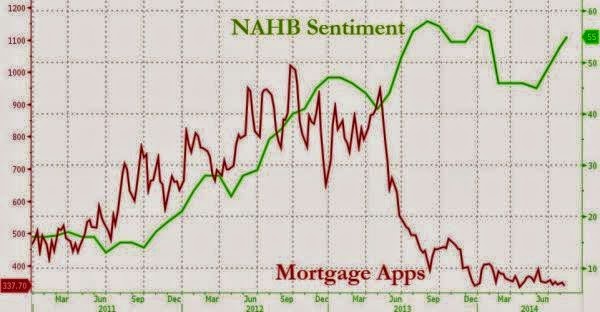 Quantitative easing will cease come October, unless Yellen and Wall Street can create a new “crisis” to cure with more money printing. By every valuation measure used over the last 100 years, stocks are overvalued by at least 50%. By historical measures, home prices are overvalued by at least 30%. Ten year Treasuries are yielding 2.4%, while true inflation is north of 5%. With real interest rates deep in negative territory, the bond market is even more overvalued than stocks or houses. These simultaneous bubbles have been created by the Federal Reserve in a desperate attempt to keep this debt laden ship afloat. Their solution to a ship listing from too much debt was to load it down with trillions more in debt. The ship is taking on water rapidly.

We had a choice. We could have bitten the bullet in 2008 and accepted the consequences of decades of decadence, frivolity, materialism, delusion and debt accumulation. A steep sharp depression which would have purged the system of debt and punishment of those who created the disaster would have ensued. The masses would have suffered, but the rich and powerful bankers would have suffered the most. Today, the economy would be revived, saving and investing would be generating needed capital for expansion, and banks would be doing what they are supposed to do – lending money to businesses and individuals. Instead, the Wall Street bankers won the battle and continue to pillage and loot the national wealth while impoverishing the masses.

The arrogance, hubris and contempt for morality displayed by the ruling class is breathtaking to behold. They think they are untouchable and impervious to norms followed by the rest of society. They may have won the opening battle, but will lose the war. Discontent among the masses grows by the day. The critical thinking citizens are growing restless and angry. They are beginning to grasp the true enemy. The system has been captured by a few malevolent men. When the stock, bond and housing bubbles all implode simultaneously, all hell will break loose in this country. It will make Ferguson, Missouri look like a walk in the park. I wonder if the occupants of the Eccles building in Washington DC will get out alive.

“It is well enough that people of the nation do not understand our banking and money system, for if they did, I believe there would be a revolution before tomorrow morning.” – Henry Ford

Hey, I'm cited on that Monticello.org website! A few years ago, I told Jim Quinn, Glenn Beck, Rush Limbaugh, even Rachel Maddow to never get a quote wrong agan--just ask me. No one ever ssked me. I'm a contributor to the Yale Book of Quotations. I don't know of too many other experts that have to beg to work for free--and get turned down!

This fake quote is pretty embarrassing.

Sorry for the typos. I'm sick with Crohn's Disease and life is tough.