Ed Kilgore -- if that is his real name -- is allegedly a journalist working at the execrable Washington Monthly. His claim to fame is a startling resemblance to Gollum, though without that creature's smooth complexion and strong chin.

We already know that the fascist, authoritarian left wants to ban anyone and anything they don’t agree with. But usually they have the good sense not to say so out loud for fear that people will realize they are fascist authoritarians. But one “journalist” finally admitted the truth. 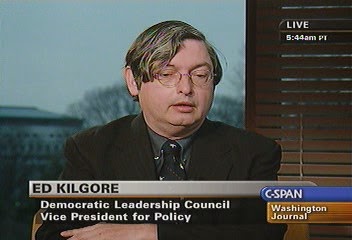 Left-winger Ed Kilgore, who blogs for Washington Monthly magazine, made to comment on the new ideas that NBC has for revamping Meet The Press when Chuck Todd takes over the venerable Sunday political show (Todd himself is an old Democrat operative, by the way).

In his August 25 post entitled, “Who Should Be Banned as Panelists For the New ‘Meet?’,” Kilgore notes that NBC president Deborah Turness is saying that she wants to have a panel of journalists question each guest as a sort of “coffeehouse conversation.”
Turness imagines that this will bring “more edge” to the long running Sunday political show. Kilgore thinks this is a terrible idea. Why? Because *gasp* that panel might have conservatives on it.

So, Kilgore has a solution for this conservative “problem.” He thinks NBC should ban all conservatives as panelists...

If Turness is serious about this, we need to organize a grassroots campaign to ask that certain journalists be permanently banned from the panel of Meet The Press, or we’ll boycott the damn thing ab initio. I’d start with Peggy Noonan, Bill Kristol, David Gergen, David Brooks and George Will. Even at their best, they’ve all gotten more airtime than their shaky talents merit. But I’m sure you have dozens more who deserve the Meet Ban. Fire away in the comment thread.


Now that is how we know all liberals think. They don’t want the free and open exchange of political ideas that the founders dreamed of when they crafted the Bill Of Rights. No, all liberals are fascists at heart and given the power they would ban all opposing views.

Kilgore's advocacy for virtual book burnings is surprising only because it pulls back the curtain on the totalitarian mindset endemic to the modern Democrat Party.

Kilgore would have been at home in the old Soviet Union organizing pogroms or as a wannabe-Sturmbannführer harrassing Jews and other political undesirables in the street.

Chuck Todd has always been a political analyst. He started working at Hotline while in college.

Now that's someone whose hair I'd love to drench in tar and set on fire just for the video.

LOL. None of the people Kilgore wants to ban is actually Conservative. Nevertheless, the banning of an opposing voice is, itself, a fascistic act.

He'd look good with Eric Holder's mustache, but, it'd be put to better use in the fat lady's bikini bottom.

The mindless group-think of these people is staggering - as is the speed in which they all get and repeat their talking points.

Then again, nature abhors a vacuum, including vacuums of leadership. With John Boehner and the rest of the assholes hogging the leadership positions of the GOP, and the Karl Roves and Rince Prebuses being annointed as the GOP talking heads, we have a vacuum, and it is being filled by the likes of this idiot Kilgore.

What a sorry excuse for a journalist. Your articles are fictitious and ONLY speak your leftest point of view . I not only blame you for your ignorance but anyone that publishes your unfounded stories.