I, For One, Welcome Our New Insect Overlords

A spider has photobombed BBC Scotland's news to capture an insect trapped on a camera showing live shots of the River Clyde in Glasgow. 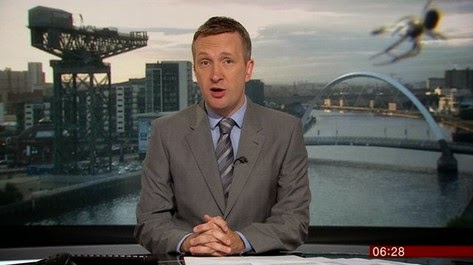 The "webcast" came as Graham Stewart was presenting one of Reporting Scotland's early morning bulletins. The spider then retreated with its prey.

*Simpsons anchorman Kent Brockman sold out the entire human race on one of his newscasts after seeing an ant crawl across a camera in the space shuttle and then assuming it heralded an invasion by giant ants bent on world domination.

Fearing for his life, he announces his willingness to submit to the imagined invaders.

“One thing is for certain: there is no stopping them; the ants will soon be here. And I for one welcome our new insect overlords. I’d like to remind them that as a trusted TV personality, I can be helpful in rounding up others to toil in their underground sugar caves.”

at 3:27 PM
Email ThisBlogThis!Share to TwitterShare to FacebookShare to Pinterest
Labels: Comix, MSM