I'm certain these new and impeccably sourced reports will dissuade Eric Holder and Al Sharpton from race-baiting and fomenting violence (that's what we professionals in the blogging business call yer Grade A Sarcasm). 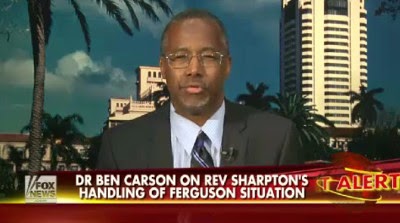 Wilson was coming off another case in the neighborhood on Aug. 9 when he ordered Michael Brown and his friend Dorain Johnson to stop walking in the middle of the road because they were obstructing traffic. However, the confrontation quickly escalated into physical violence, the source said.

“They ignored him and the officer started to get out of the car to tell them to move," the source said. "They shoved him right back in, that’s when Michael Brown leans in and starts beating Officer Wilson in the head and the face."

The source claims that there is "solid proof" that there was a struggle between Brown and Wilson for the policeman’s firearm, resulting in the gun going off – although it still remains unclear at this stage who pulled the trigger. Brown started to walk away according to the account, prompting Wilson to draw his gun and order him to freeze. Brown, the source said, raised his hands in the air, and turned around saying, "What, you're going to shoot me?"

At that point, the source told FoxNews.com, the 6-foot-4, 292-pound Brown charged Wilson, prompting the officer to fire at least six shots at him, including the fatal bullet that penetrated the top of Brown's skull, according to an independent autopsy conducted at the request of Brown's family.

Wilson suffered a fractured eye socket in the fracas, and was left dazed by the initial confrontation, the source said. He is now "traumatized, scared for his life and his family, injured and terrified" that a grand jury, which began hearing evidence on Wednesday, will "make some kind of example out of him," the source said.

If we had a real president, he would speak out for peacable assembly and law and order, no matter the race, creed or religion involved. But MLK, Jr. he ain't.

These facts were out there 5 days ago. Michael Brown was a terrorist and he legally got what he deserved. Everybody knows it, and when we turn this page people will piss on his grave. Eric "gunrunner" Holder and the other race-baiters will be the only ones left beating the drums for "diversity".

Who is funding the community rable rousers that are there? Why are the media repeating their Trayvon Martin stick? Why is the governor of MO acting like such a pimp?

wHERE IS THE gop?

People try to make it seem like the "sides" of this case are iffier than they are, when in fact that same story of how Darren Wilson had to defend himself has been very consistent and I believe will prove to be true without a shadow of a doubt by the grand jury, but nobody will want to change their mind.
http://writingtheleftunsaid.blogspot.com/2014/08/my-rant-about-ferguson-and-michael-brown.html

George Zimmerman sent a clear message to thugs: We're not going to give in anymore.